WA-bred newcomer Nimble lived up to his handy barrier trial form with a gutsy first-up win in Singapore on Friday evening.

Now owned by MMW Stable, Nimble reeled in breakaway leader Lim’s Sincere and kept finding for jockey Johnny Powell to win by a three-quarters of a length in a quick 58.88s over 1000m.

“We watched his replays in Perth and he’s actually a horse who comes from off the pace,” trainer Leticia Dragon said. “There was some speed in the race and I told JP to let him settle wherever he felt comfortable. He rode to instructions and it’s paid off.”

Powell reported Nimble was cruising off a strong clip approaching the home turn. “There wasn’t much point holding him back. He was very fit after two trials so I got him going early. He did a good job first-up and ran a good time.”

Patronize sired him from Grand Oscar (Grandera) who won at Ascot and Belmont for Ron Sayers (Yarradale Stud) and Glenn Martin (Touchstone Farm).

“They were partners in three mares that were put up for sale when Glenn left Touchstone and moved to Thailand,” Hamill recalled. “I bought Grand Oscar for $1,000!” The mare has a 2yo filly named Chloyo (City Place) and her final foal is a yearling colt by Demerit.

Nimble / The Shoe can be a handful for his riders – Randy Tan was cautioned by stewards for crowding during his debut win at Pinjarra and Powell was suspended for careless riding on Friday.

Sayers bought into Patronize in 2013 to beef up his numbers at Darling View Thoroughbreds and the extra support has helped him rise to second on the WA sires table this season with $684,155 in prizemoney.  His speedy 3yo Chix Pic recovered from a tardy getaway to finish an unlucky second to Mystery Miss in Saturday’s LR Belgravia Stakes at Ascot.

Patronize (Redoute’s Choice) is a three-quarter brother to Exceed And Excel and stands for a $4,400 service fee alongside 2015 Karrakatta Plate winner Lucky Street ($5,500) at Darling View in Mundijong. 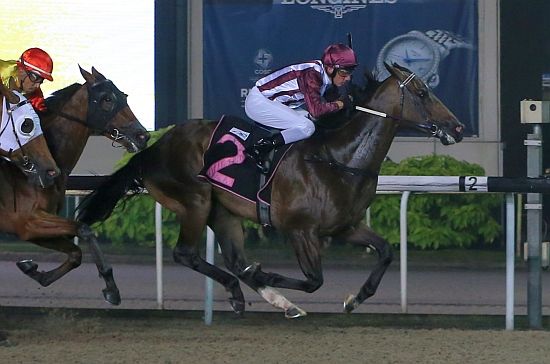