All American filly Yankee Eyes didn’t give her rivals a second glance winning by four lengths on the Murray Bridge Cup card Friday.

Racing second-up after a promising autumn campaign, she worked to the front and then waved good-bye when given the green-light by Jamie Kah in the BGC Cleaning Supplies Maiden (900m). “She looked a treat today and is a different horse this time in,” Kah claimed. “She’s got ability but couldn’t do it at both ends last prep.”

Yankee Eyes (3f All American – Miss St Tropez by Magnus) was beaten a lip on debut at the Oakbank Easter Carnival and then gave a sight in the LR Dequetteville Stakes before fading into the shadows at Morphettville.

“She’s matured into a bigger and stronger horse,” Kah added. “I had to dig her up to travel on the pace today. That’s the only way to win these 900m races and she just put them away in the end.

“But what she really wants to do is settle and then run home. That means she is only going to get better next start.”

Yankee Eyes is owned and trained by Dan Clarken and Oppy MacGillivray after making $50,000 at the 2017 Adelaide Magic Millions. She’s the first foal of a half-sister to Don’t Doubt Mamma (G2 Let’s Elope Stakes) and Risen From Doubt (LR Maribyrnong Trial).

It’s a successful branch of the Joie Denise family that has generated Group 1 winners Tuesday Joy and Sunday Joy plus the latter’s Australian Champion More Joyous.

All American has a black-type prospect in action at Caulfield on Saturday when Darren Weir saddles Kaplumpich for the LR Gothic Stakes. A last-start Moonee Valley winner, he was also sourced at the 2017 Adelaide Magic Millions for $70,000.

Kaplumpich is the third winner for All American and Sandown Lakeside winner Illusionary (Hussonet). The dam is a half-sister to Chase The Rainbow (G2 Bill Stutt Stakes) and Ms Funovits (G2 Karrakatta Plate).

All American (Red Ransom) has his first Sunspeed-bred yearlings available at the 2019 Perth Magic Millions. He’s based at Geisel Park for a $7,700 (inc GST) service fee alongside Vert De Grece ($5,500). 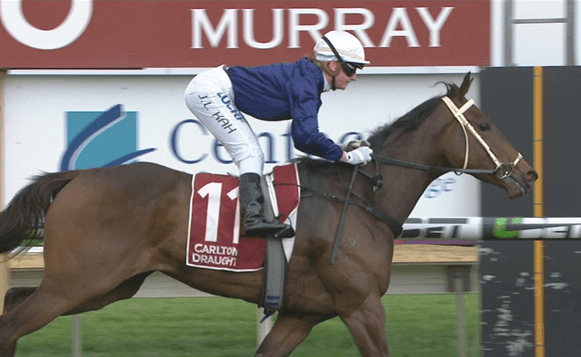