Mystery Miss has ramped up the summer carnival stocks of Bob and Sandra Peters with a stunning victory in the LR Belgravia Stakes (1200m) at Ascot.

Perth’s leading owner-breeders also scored with Showcase (Big Brown), Arcadia Queen (Pierro) and Stageman (Written Tycoon) but it was their feature winner that stole the headlines on Saturday.

Mystery Miss (3f Animal Kingdom – Mystical Miss by More Than Ready) was locked away on the fence before angling into the clear and flashing home to collar Chix Pic (Patronize) right on the line.   “It got me going a bit that one,” Peters told The West Australian.  “I didn’t think she would get there with 200m to go.”

Her dam Mystical Miss was a $425,000 buy for Peters at the 2012 Inglis Easter yearling sale and was trained by Peter Moody to win at Ballarat and Morphettville.  Second-dam Magical Miss (Danehill) won the G1 Thousand Guineas – G1 Victorian Oaks double in 2001.

The cerise and white silks are also on track for black-type with True Attraction (More Than Ready).  “He’s still a bit wayward but obviously knows how to find the line,” Peters said following a last-to-first victory at Ascot on October 20.  “He’s on a path to the WA Guineas.”

The G2 WA Guineas (1600m) worth $500,000 is scheduled for November 24.  Peters claimed consecutive editions with Old Nick and Chelsea back in the 1990s and he won it again with Perfect Jewel last year. 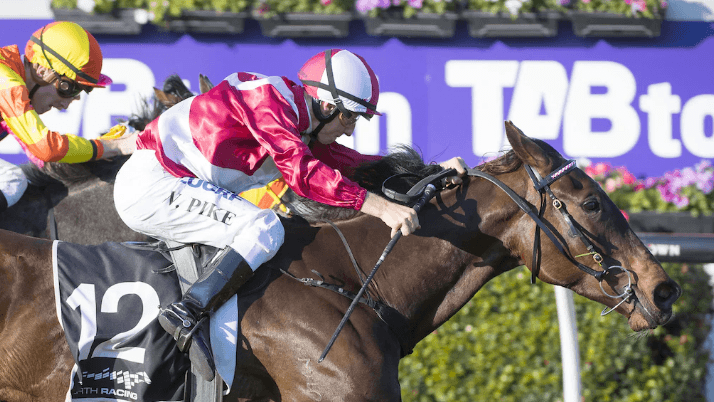