All American hotline to Hong Kong

Hong Kong agents could come calling when the first of the WA-bred All American yearlings parade at the Perth Magic Millions in February.

The Geisel Park sire has been in the headlines at Sha Tin this week with Dark Dream appearing for the first time in public on Tuesday and Elusive State cantering home on Wednesday.

Dark Dream followed Yankee Rose as the second Group 1 classic winner by All American in the 2018 Queensland Derby (2200m) and trainer Frankie Lor is setting him for the $18 million G1 Hong Kong Derby (2000m) on March 17.

The star import was given a soft 1200m trial on Tuesday morning under a firm hold from Zac Purton. Coming to Hong Kong with a rating of 91, Lor conceded it has been difficult finding suitable races and keeping him fresh at the same time.

“At this stage, I will give him two more trials and then find a race,” Lor said. “Because his rating is so high, it’s hard to find the right one for him. But he’s settled in and is very quiet and relaxed despite the heat and busy nature of Sha Tin.”

Purton is in demand and hasn’t made any commitments this far out from the Derby. “He will show me if he’s worth riding,” the Australian champion said. “He went OK, it was only his first trial and he is a stayer so we were not expecting too much.” 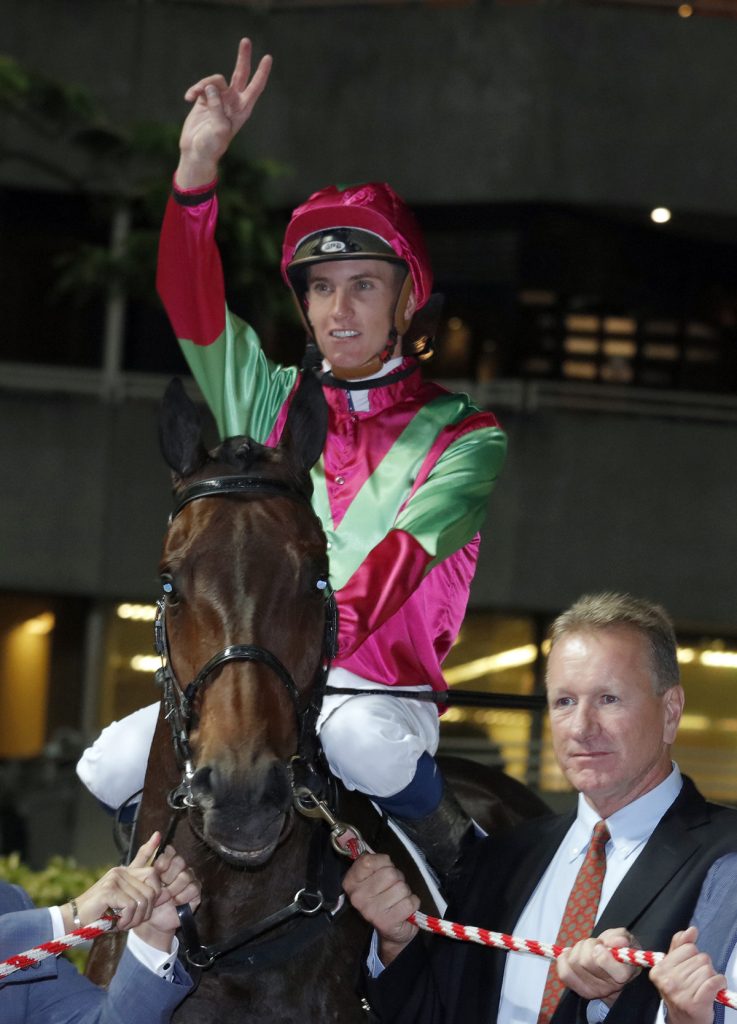 Short-priced favourite Elusive State (pictured) didn’t give in-form trainer Tony Millard and jockey Chad Schofield any anxious moments in the Shek Shan Hcp (1650m) on Wednesday night. He cleared out by the best part of five lengths and is unbeaten since moving across from retired trainer Derek Cruz.

“He certainly surprised me tonight, I didn’t expect him to win like that,” Millard said. “As long as he comes out of it well he can run again in two weeks. He could be something special.”

All American sired Elusive State from Jarada (Redoute’s Choice) who also foaled Kiwi stakes winner Absolut Excelencia (Excellent Art). He created a big impression winning a Te Rapa juvenile on debut in June 2016 and was exported without another start in NZ.

Wednesday’s prizemoney improved his bank-balance to $3.30 million. Other All Americans who have paid their way in Hong Kong include Green Card ($3.88 million) and Lucky Dollar ($1.57 million).

Elusive State was the fourth Hong Kong winner with Sunspeed links in October.

Shanghai Master opened last month’s account at Happy Valley for trainer Francis Lui. He was bred by Craig Thompson at Mt Hallowell Stud in Denmark and had won the 2016 Sir Ernest Lee-Steere Classic as Lusaha.

Oakland Park-bred sprinter Saul’s Special was next cab off the rank when he made it three wins from his last four starts at Happy Valley.  He also raced in Mt Hallowell’s colours winning the 2016 Fairetha Stakes and that prompted an offer from Hong Kong owner Chen Zhuo Lin.

Starlit Knight was a front-running winner of the Tsing Yi Hcp (1650m) at Happy Valley on Sunday. A son of former Westbury Park sire Fath (USA), he was bred at Loloma Farm and won the 2016 Raconteur Stakes at Ascot when racing as All Gee.

All American (Red Ransom) stands for a $7,700 service fee at Geisel Park.