Back then we were watching Bobby Limb, Mr Squiggle and we rocked at Six O’Clock, construction had started on the Sydney Opera House (sans lights and advertising), we actually won at cricket and Bob Menzies had been our prime minister for a decade.  Yes, that’s right, the one prime minister for 10 years straight!

Macdougal won the Melbourne Cup, Fine and Dandy the Golden Slipper and Noholme the Cox Plate, while over in Perth, a budding horseman called Bob Peters was watching a smart filly called Queen of the May capture the West Australian Guineas, having earlier won the WA Champion Fillies Stakes.

Nearly 60 years later, Queen of the May’s Champion Fillies / Guineas double hadn’t been emulated…well, that is until Saturday when the Bob Peters bred and raced 3yo filly, Arcadia Queen, took out the Guineas in all her crowning glory: scooting away to score by three lengths.

This is some filly. A daughter of Pierro, Arcadia Queen was only first sighted in September, winning at Belmont, then she won at Ascot in October and, in the space of 18 days, has run third in the Listed Burgess Queen behind multiple stakes winner, Lady Cosmology, won the Champion Fillies and now the WA Guineas.  Five starts. Four wins, one stakes third.

The Guineas win alone would be enough to dine out on, but was ultimately just one prong in a remarkable day at Ascot for Peters and wife Sandra whose cerise and white colours were also carried to success by homebreds Galaxy Star in the Group 1 Railway Stakes and Mississippi Delta in the LR Magic Millions Tattersall’s Cup.  And just for good measure, Celebrity Dream (purchased as a yearling) ran second in the LR Jungle Mist Classic, while yet another homebred in Royal Statue took his record to four wins from six starts by capturing the lucky last.

“Yes, it was a pretty good day,” an understated Peters told Aushorse.  “We’ve had four stakes winners on the one program previously, but never with a Group One mixed in.

“I remember Queen of the May…she was trained by Albert Jordan and from memory also went on to race in Melbourne.  Very good filly and it’s great to have one of my own equal the record.”

Riding horses since a very young age, Peters initially found his way with a different kind of horsepower and toiled in the motor vehicle industry for a number of years before moving into commercial property.

Never losing his passion for the neddies, Peters began racing horses around 45 years ago and has no idea as to the number of stakes winners he has bred and/or raced in that time, let alone winners.

He has kept a mental note of the Group 1 wins however – 23 with Galaxy Star thrown in the mix – and is reluctant to isolate an all-time favourite, although Old Spice comes close.

A Kaoru Star stallion, Old Spice was purchased by Peters as a yearling and, while a Listed win, WA Guineas second and Group 1 Derby third hardly places him among racing’s elite, he did sire a LOT of winners for Peters and would produce 23 stakes winners overall, including Melbourne Cup winner Rogan Josh and Australian Cup winner Old Comrade.

“Old Spice never covered huge books (averaging 49 mares over 17 seasons) but one year he was second only to Danehill in terms of stakes winners,” Peters points out proudly.

While Peters’ contribution to West Australian racing is immeasurable, his broodmare band is spread throughout Queensland, NSW and Victoria.

“I can’t put an exact number of my mares but it’s ever growing with fillies retiring from the track all the time,” Peters adds.  “I’ve got shares in Pierro, Vancouver, Animal Kingdom, Dundeel, Xtravagant and Tosen Stardom with the bulk of the resultant foals coming back over to the west to race.”

For instance, Perth Cup winner, Star Exhibit – out of a half sister to the dam of Galaxy Star – finished midfield in Saturday’s Railway, Mississippi Delta is a half sister to 2014 Railway winner Elite Belle and her second dam is a half sister to Group 1 Kingston Town Classic winner Old Nick, while Arcadia – the dam of Arcadia Queen – has also produced two other stakes winners for Peters, including Group 2 West Australian Derby winner, Arcadia Dream.

Talk about a dream team! 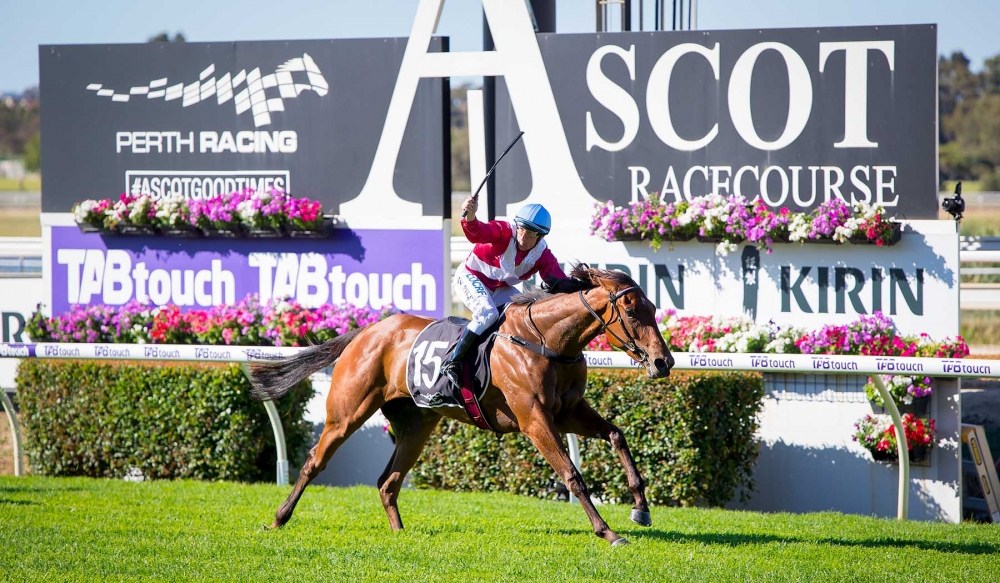