Trainer Darren McAuliffe was going to send Unikat for a spell last week but changed plans and backed him up for another Ascot win on Wednesday.

The unbeaten sprinter led the field in the Fifth Street Furniture Mart Hcp (1500m) and was still travelling strongly on the line for Tayla Stone who took over from Mitch Pateman.  It completed a hat-trick in October for the son of Scenic Lodge sire Universal Ruler.

“He will come back a more complete horse after a spell,” McAuliffe said.  “He’s doing it on natural ability and still needs to furnish but he’s got a will to win.”

Unikat is the latest Universal Ruler to win and then keep winning.  Multiverse was going for five in a row at Ascot last Saturday but was never on the track in the race won by Stageman.

His 2yo divisional leader Lady Cosmology was also hampered by a wide barrier in the LR Belgravia Stakes earlier the day.  She was Perth’s most consistent filly last season winning the LR Supremacy and then running seconds in the G2 Karrakatta and G3 Sires’ Produce Stakes.

Universal Ruler was Champion WA 2YO sire in 2017-18 following multiple late-season victories by Angelic Ruler, The Velvet King and Market Wrap at Belmont.  He stands for a $4,950 fee at Scenic Lodge.

Unikat is an Oakland Park homebred and is owned by a ladies’ syndicate that includes Susan, Helen, Candice, Ann, Trish & Maddie.  And the girls have instigated a champagne confidence-booster before he races!

His dam O’Katie (O’Reilly) is a half-sister to stakes winners No Wine No Song (G1 Sydney Cup) and Atlantic Air (LR Bagot Hcp) but she wasn’t sighted in two starts at Ascot for Fred Kersley.

Second-dam Deep Time (NZ) was a $32,000 buy for John Chalmers Bloodstock (FBAA) on behalf of Oakland Park at the 2007 Inglis Easter Broodmare Sale.  There’s a WA link in the family going back to 1984 Pinjarra Guineas winner On Stage (Marceau).

O’Katie has a yearling colt by Dundeel and she foaled another colt by Demerit in August. 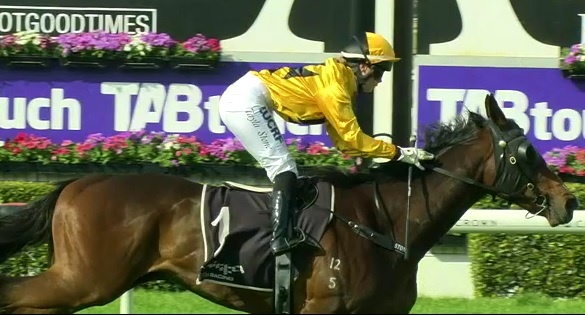