Trainer Richard Collett will make a decision after Christmas whether to set his filly for the G1 NZ Oaks (2400m) at Trentham on March 16. The Pukekohe-based conditioner was looking to the future with confidence after she came from last to win the Ross Roof Runner Hcp (1400m) at Ellerslie on Sunday.

Tiger Silk (3f All American – Star Pupil by Starcraft) produced the same powerful finishing burst along the rails that she displayed when winning a Ruakaka maiden last month. “We’ve taken her along quietly and she is learning all the time,” Collett said. “She could have run as a two year-old but strained a muscle so we put her aside to let her strengthen some more.

“She went better with blinkers last time and a tongue tie today also helped. She was still a little hesitant to take a gap at the 300m but more racing should address that issue.”

“She has some good staying blood on her dam’s side so we think she will get a trip as she matures,” Collett added. “We might be back at Ellerslie for the Christmas Carnival before setting a course for the NZ Oaks.”

Collett and his wife Judy bought Tiger Silk for $85,000 at the 2017 Inglis Classic Sale. She is a three-quarter sister to All American’s first stakes winner Bachman and is also related to Stepitup (Hussonet) who won 15 races topped by the LR Singapore 3YO Classic.

All American sired another winner, albeit with more modest prospects, a few hours later in Australia. His locally-based gelding Pray For Us scored a narrow victory in the Signmob Hcp (1500m) for trainer Shane Fliedner at Bendigo.

“He’s been a bit frustrating but there was a real ping in his step today,” jockey Jake Noonan said. “He knuckled down and, when push came to shove, stuck his head out right on the line.”

Pray For Us is raced by the Bendigo Classic Racing and is a half-brother to Turffontein Group 3 winner Killua Castle. Their dam Prayers’n’promises (Encosta De Lago) is a sister to Besame Mucho (G3 Research Stakes).

All American has 12 yearlings at the 2019 Perth Magic Millions from his first WA-crop conceived at Geisel Park. The colt from Bayella (Lot 9), on account of De Grey Park, is closely related to Saturday’s $500,000 Inglis Nursery winner Accession. 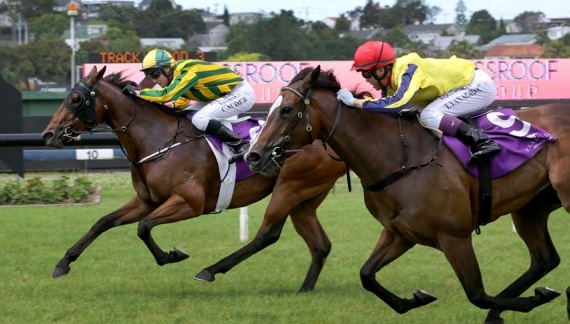