Jockey Barend Vorster could not help but give a nod to Singapore superstar Rocket Man when Rafaello got up by a nose in the Flying Fulton Stakes (1200m) on Sunday.

Rocket Man (Viscount) was the horse who put Singapore on the map in 2011 winning the G1 Golden Shaheen with Vorster aboard in Dubai.  The international breakthrough came shortly after he split J J The Jet Plane and Sacred Kingdom in a memorable three-way finish to the G1 Hong Kong Sprint.

He also won the G1 KrisFlyer International Sprint at Kranji and a record four Lion City Cup from 2009 to 2012.

Though Rafaello isn’t in the same league, the Fred Crabbia-owned gelding has been a worthy bearer of the same red and black silks and it showed again when he dug deep on the rails to fend off Constant Justice.

“Winning in these colours made it even more special, especially today, with the international racing in Hong Kong,” Vorster said. “I’ve come to know Rafaello over his last couple of starts. I didn’t want to go too early, so I waited before asking him to sprint home.”

Rafaello is one of 16 stakes winners by Mungrup Stud champion Oratorio. His latest is last month’s LR Jungle Mist Classic winner Misty Metal and she wasn’t disgraced when runner-up in Saturday’s LR Jungle Dawn Classic when beaten a length by the Peters Investments mare Celebrity Dream.

Oratorio has 13 yearlings entered for the 2019 Perth Magic Millions including the close relation of Mississippi Delta who won the LR Tattersalls Cup last month in the same colours as Celebrity Dream.

Catalogued as Lot 261, the Oratorio – Petite Angel (Marooned) colt is a full-brother to G2 Karrakatta Plate winner Clueless Angel. He’s also out of a sister to the dam of Mississippi Delta. 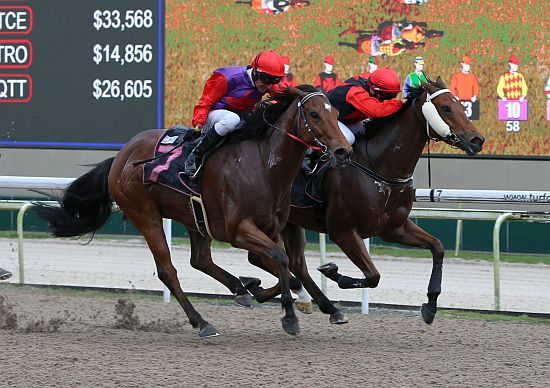