Scenic Lodge sire Universal Ruler has claimed his second city double in as many Saturdays with Angelic Ruler and Snow Lord at Ascot.

Angelic Ruler won first-up in the Mrs Mac’s Hcp (1200m) for part-owner and breeder Colin Pearce and his trainer-sons Dan and Ben.  She had shown immense promise winning two in a row at Belmont in July but was sidelined for the spring 3yo filly features.

Expat Perth jockey Damian Lane gave her time to settle until asking for full throttle into the home straight.  She reacted with a brilliant turn of acceleration that put the race to bed passing the furlong pole.  Black Sabbath, who was coming back in class from an unplaced run in the G2 WA Guineas, ran second for Scenic Lodge champion Blackfriars.

Angelic Ruler is from family favourite Tip The Angel (Tip The Pro) who won 8 races and prizemoney totalling $228,600 for Pearce Racing.  “It’s just great to get a lovely filly from that mare,” Colin Pearce said.  “Tip The Angel did a lot for me and to get this filly to carry on the line is really pleasing.

“We have a pretty good opinion of Angelic Ruler and the Burgess Queen Stakes and Champion Fillies Stakes were in our sights but she had a setback.  That could turn out to be a blessing in disguise if she progresses through the grades.”

Tip The Angel died last year after foaling a filly by Vital Equine.

Universal Ruler has a half-sister to Playing Marika (Lot 68) from Bellbridge Park (as agent) at the Perth Magic Millions in February.  The Playing God filly completed a hat-trick for Divitini Racing at Ascot last month. 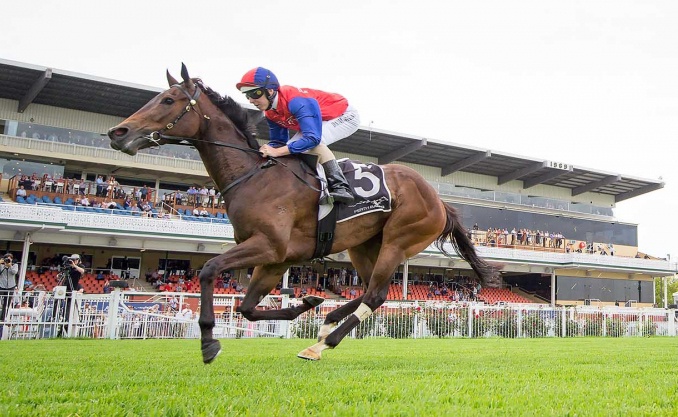