Balmoral Park was represented by several winners on either side of the Xmas -New Year break starting with its Proart homebreds Invisible Pro and Missing Pro.

Invisible Pro collared Stratocreed and then held off late closer Notta Mocha to claim his second win at Ascot in the Minearc Systems Hcp (1400m).  “I was confident he would run in the top-three,” trainer Simon Miller said.  “He didn’t handle York two starts ago and was building momentum off his last run at Northam.”

Invisible Pro was never sighted behind longshot winner Avidus at Ascot on December 29 but signalled a return to form when runner-up to Fair Sonari at Pinjarra’s stand-alone meeting on Saturday.

Missing Pro is on a hat-trick after winning her first two starts at Narrogin and York.  The 3yo filly will be a valuable addition to the Balmoral broodmare ranks when she retires following the death of her dam Never Here (Elvstroem) last year.

Miss Swindle (Murtajill) also carried the same light blue & white-checked colours to victory on the same York program as Missing Pro.  She was bred by Irvine in partnership with George & Wally Daly and had earlier wins to her credit at Ascot, Northam and Pinjarra.

Irvine has also reserved a spot at his Bedfordale nursery for Miss Swindle.  She’s the final foal of Misguiding (Royal Academy) and is a half-sister to last year’s LR Goldmarket Hcp winner Raido.

Balmoral Park graduate Nemiroff weighed in with a Pinjarra maiden win just before Christmas.  The Universal Ruler 3yo is a stablemate of Missing Pro and races in the same colours as G1 Railway Stakes winner Scales Of Justice.

Nemiroff was a $22,000 buy from Balmoral Park at the 2017 Perth Magic Millions.  His dam Elusive Choice (Choisir) foaled a colt by Proart in November. 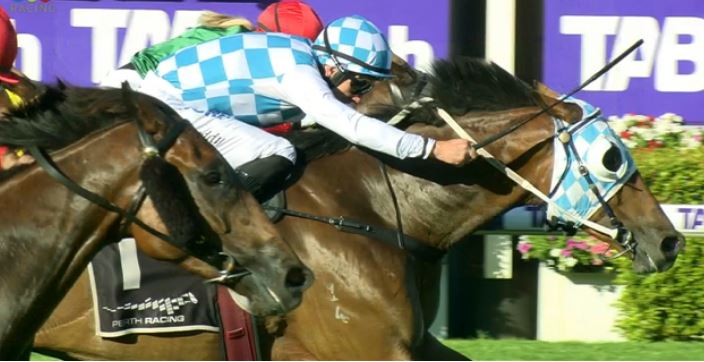