All American’s Hong Kong import Dark Dream was a beaten favourite in the G1 Classic Mile on Sunday but lost no friends with a fast-finishing fourth behind stablemate Furore.

Last year’s G1 Queensland Derby winner heads pre-post markets for the G1 Hong Kong Derby in March and was expected to benefit from the hit-out over 1600m at Sha Tin.  He made up many lengths in the final furlong but was much the worse for wear when returning to scale.

Dark Dream was inconvenienced at the 900m and was pole-axed at the top of the straight.  Hugh Bowman permitted Furore to shift out when not clear of Gold Win and that resulted in a chain-reaction that affected Easy Go Easy Win, Charity Go and Packing Warrior who shifted out abruptly causing Dark Dream to be badly hampered. 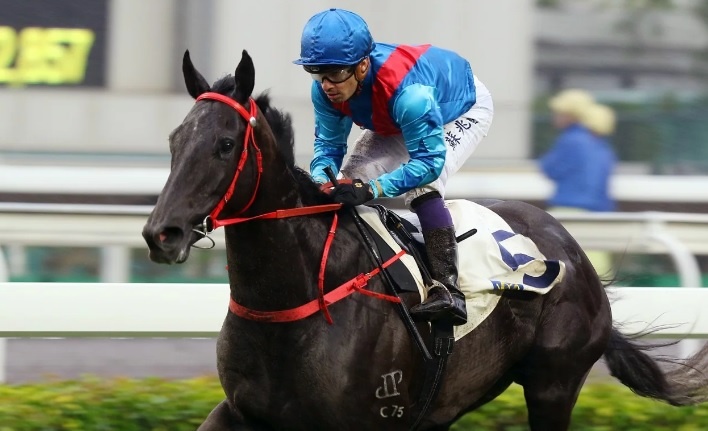 The HKJC Veterinary Officer reported Dark Dream (pictured) sustained wounds to the inside of both hocks.  Bowman was fined $75,000 and suspended until February 8, a week before Winx resumes in the G2 Apollo Stakes at Randwick.

“I thought Dark Dream was my best chance,” trainer Frankie Lor admitted at the presentation ceremony for Furore.  “The only thing was the bad barrier.  He was wide and then got that bump.”

Jockey Silvestre de Sousa confirmed the severity of the interference.  “The draw didn’t help and he got knocked out twice in the straight.  He’s still a nice horse.”

It was a frustrating end to another winning week for All American.  The Geisel Park resident sired 7 winners in 7 days starting with Yankee Eyes at Morphettville last Saturday.  The 3yo filly was winning for the third time this campaign and didn’t go around a horse in the Nutella Palooza Hcp (1539m).

“I intended to lead because she didn’t feel interested racing off the pace last time,” Kayla Crowther said.  “But she was happy to take a sit today and when the others angled wide, I stayed on the rails and she did the rest.”

All American’s Kiwi filly Tiger Silk got her classic campaign back on track with a very impressive last-to-first victory in the Splice Construction Hcp (1400m) at Pukekohe on Saturday.  She had won at Ruakaka and Ellerslie before a last-start loss in the LR Uncle Remus Stakes on Boxing Day.

“She raced wide from an outside barrier on a very heavy track that day,” trainer Richard Collett explained.  “That was her third start in a month so we freshened her up for today.”

There was more good news out of Japan last week when Northern Farm reported Yankee Rose had foaled a filly by all-conquering sire Deep Impact.  All American’s Champion Australian 2YO & 3YO Filly was purchased by Katsumi Yoshida after pulling up lame in last season’s G1 Memsie Stakes.

All American has his first consignment for the Perth Magic Millions being prepped by a half-dozen vendors and among them is a close relation to Our Crown Mistress.  Catalogued through Belvoir Thoroughbreds as Lot 245, he’s from a three-quarter sister to the widely-travelled grey mare who won the LR Just Now Quality at Doomben last month.