Lookout surfaced after a spell to win a Belmont trial on Monday and he looks a moral in a maiden next month.

The Patronize 3yo has been given time by part-owner and trainer Neville Parham.  He finished second twice and fourth twice in a short, sharp campaign during Belmont’s winter season last year.

Lookout was bred by Darling View Thoroughbreds and cost $31,000 from Western Breeders Alliance at the 2017 Perth Magic Millions.  His dam Jev Express (Key Business) is a half-sister to Calophylla (G3 Champion Fillies Stakes).

Patronize continued his rise up the WA sires’ premiership last Saturday when Alpha Sky won for the fourth time at Ascot.  The following day, he doubled up with rising Singapore star Nimble at Kranji.

Alpha Sky (4g Patronize – Au Fait by More Than Ready) is trained by Simon Miller for a part-owner and breeder Peter Jones.  His older sister Kimbo’s Girl has won three times at Ascot for the same connections and she was last seen on Railway Stakes day parting company with Kate Witten.

“He can develop into a carnival horse in twelve months,” Miller predicted after Alpha Sky raced on the pace and refused to surrender in the Schweppes Hcp (1200m).  “He was buffeted last time so I added blinkers today.  I thought it would give him confidence and it worked.”

Patronize has progeny earnings of $1.07 million this season and is fourth on the WA table behind the Scenic Lodge triumvirate of Blackfriars, Snippetson and Universal Ruler.  His Perth Magic Millions yearlings includes a Western Breeders Alliance sister to Patron Black (Lot 272) who has won twice for trainer Gary Portelli in NSW. 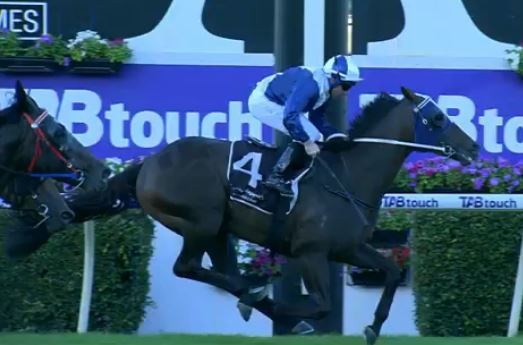