Universal Ruler sired his second LR Rangeview Stud Classic (1400m) winner in a row on Sunday with a filly bound for Melbourne.

Angelic Ruler travelled to Bunbury for her fourth start this season following a meritorious campaign at Ascot.  She scored a running double in December prior to a last-start third on the Perth Cup undercard when failing to see out 1600m.

Universal Ruler claimed the 2018 Rangeview Stud Classic with Abdicator and this year’s winner will use it as a stepping-stone for an interstate transfer.  “It’s a great result for our family and the other part-owners,” co-trainer Dan Pearce said.  “We kept her fresh in the month between runs and were confident today.”

Jockey Joey Azzopardi settled Angelic Ruler back in the field despite an on-pace bias earlier in the day at Bunbury.  She was angled wide in the straight and won with something in hand from the Peters Investments pair Final Hearing (Reset) and Regal Power (Pierro).

“It was my first time on her but Dan said she was a straightforward filly,” Azzopardi said.  “I rode her like the best horse in the race and she always had them covered.”

Angelic Ruler is prepared by Pearce and his brother Ben for a syndicate managed by their father Colin who bred her from his stakes-placed dam Tip The Angel (Tip The Pro).

Quilista (Scandal Keeper) won the 2017 Classic triggering a move east where she has won Group races at Randwick & Rosehill and minor events at Flemington & Caulfield.

Universal Ruler has earnings over $1.47 million this season and fills out a Scenic Lodge trifecta at the top of the WA sires’ table behind Blackfriars and Snippetson.

His Perth Magic Millions entrants include a colt from Svara (Lot 139) that had many admirers at the Scenic Lodge yearling parade on Sunday as did the filly closely related to Gold Coast Magic Millions 2YO Classic winner Karuta Queen (Lot 174). 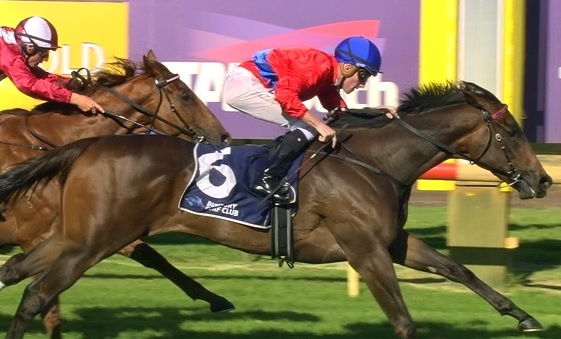