The lights were flashing when Light The Waves produced a phenomenal first-up run at Gawler last month.

Even allowing for the fact she only finished third in a Class 1 at Christmas, there were signs this could be a ground-breaking prep for trainer Tony McEvoy and owner Michael Birchall.

Light The Waves (4m Blackfriars – Ancient Lights by Canny Lad) was credited with a Balaklava maiden during an initial campaign this time last year.  She has been handled with kid-gloves to date and the flashing light was the first time she had been sighted in public since April.

She was detached from the field at Gawler and must have been the best part of a dozen lengths from the leaders at the half-mile.  “Where did it come from,” the race-caller cried.  “She made up a ton of ground and has absolutely flown home to get third.”

The stewards concurred as per their report:  “Rider Chris Caserta explained the mare was unable to maintain contact with the field in the early and middle stages.  He added she picked up after straightening and finished the race off strongly.”

Blackfriars sired 21 individual winners of 22 races in January and no other stallion – dead or alive – came within coo’ee of those figures in WA.  He signed off on Wednesday when Bon Signore, Pearls From Heaven and Rayarnie completed a treble at Ascot.

Light The Waves can get him off the mark this month when she steps up from 1200m to 1550m in Race 7 at Morphettville on Saturday.  “She did everything wrong early on,” McEvoy recalled.  “Then we changed her training routine and she delivered the day we added blinkers at Balaklava.  She will be suited up to 2000m and there are some nice races coming up in Adelaide.”

Scenic Lodge general manager Jeremy Smith remembers selling Light The Waves for $85,000 at the 2016 Perth Magic Millions.  “She was an outstanding yearling.  Plenty of size and all quality.  It’s not surprising they gave her time because she’s quite a big filly.”

Blackfriars has Come Play With Me heading east after a rousing fourth in the Australia Day Trophy (1500m) at Ascot last weekend.  He won the LR Aquanita Stakes and LR Belmont Classic in July and trainer Adam Durrant has stakes races on the radar at Caulfield.

Scenic Lodge has catalogued a Blackfriars full-brother to Come Play With Me (Lot 120) and a full-sister to Elegant Blast (Lot 25) at the Perth Magic Millions.  Other well-bred yearlings being inspected at Scenic Lodge this Sunday are the Snippetson half-brother to Samovare (Lot 122) and the Snippetson – Svara colt (Lot 139).

The Scenic Lodge yearling parade commences at 12.30 sharp at Muchea this Sunday and Jeremy Smith can be contacted for further information on 0419 943 356. 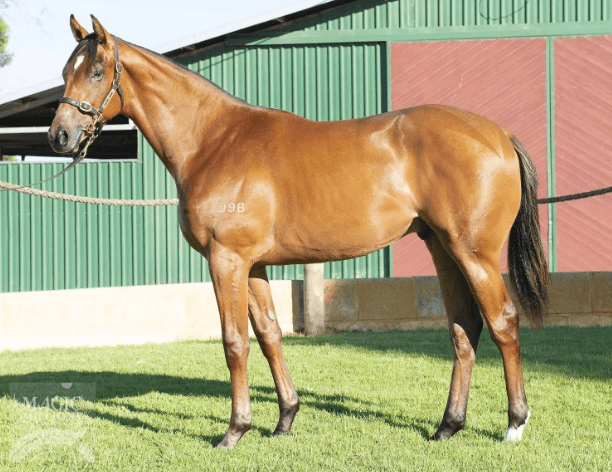 LOT 120 – Blackfriars brother to Come Play With Me