A colt by star stallion I Am Invincible topped the first session of the Perth Magic Millions yearling sale on Monday when fetching $260,000.

Magic Millions launched its ground-breaking sale at the new Swan Valley venue with turnover of $6.82 million at an average of $64,981.

Catalogued as Lot 66, the I Am Invincible colt from Western Breeders Alliance was purchased by leading Perth bloodstock agent John Chalmers in partnership with trainers Dan and Ben Pearce.

“He’s a lovely colt and that’s what you’ve got to pay for an I Am Invincible,” Ben Pearce said.  “He’s very powerful and we’ve bought him for our loyal client Warren Martin.”

The colt is the last foal of Jestceny (Real Jester) and is a half-brother to five winners including Magic Millions WA 2YO Classic winner The River and stakes performers Jestpatim and Soundcheck.

Some 23 yearlings sold for $100,000 or more on the day with fillies by Zoustar and Snitzel selling for $200,000 to Harvey Racing and Aquis Farm respectively.

“Peter Walsh bred her at Amelia Park and he will probably retain a half-share,” trainer Todd Harvey said of the Zoustar- Donna Intelligente filly.  “Her half-sister I Know That won really well at Sandown recently and she looks more like a three-year-old, too.”

The Snitzel – Belle D’Amour filly was bred by Gold Front Thoroughbreds and was purchased by Aquis Farm.  “She’s a smashing filly and she wouldn’t have been out of place at any sale,” Aquis CEO Shane McGrath said.  “We thought she was the pick of the sale and hopefully she will be up and running for the Magic Millions in January.”

Magic Millions Managing Director Barry Bowditch claimed it was a historic day for the Western Australian industry.  “There was a great vibe around the complex thanks to a huge crowd.  It’s difficult to compare our results to last year but vendors who met the market were rewarded.

“With the commitment that has been made here in the Swan Valley we are hoping it encourages our vendors to continue to invest in quality product.” 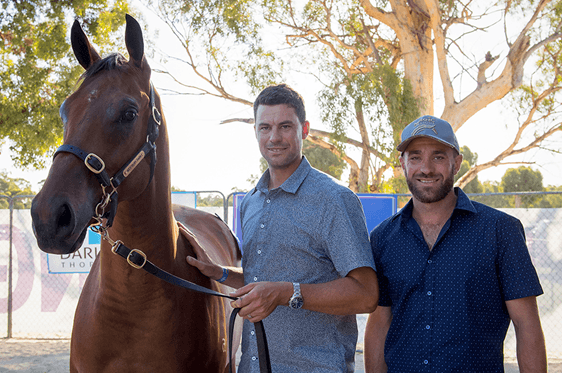 Top-priced I Am Invincible colt with Dan and Ben Pearce