Amarillo Rose has given Gold Front owners Alan and Sue Olive a winning start to a busy few weeks in the Kirin Megumi Plate (1000m) at Ascot.

The Slater filly is unbeaten in two starts for the Gingin couple who have entered 10 yearlings for the Perth Magic Millions on February 18 and 19.  She had defeated Miss West Coast on debut in the Initial Plate at Belmont in October.

Amarillo Rose travelled on the bit outside the leader and kept finding when pressured by Venetian Jewel on Saturday.  “She felt a bit casual before the start but acted like a professional as soon as gates opened,” jockey Willie Pike said.  “She fought back in the straight and was pulling away on the line.”

The Gold Front homebred isn’t eligible for the $250,000 Magic Millions Classic at Pinjarra next Saturday.  She will be nominated for an Ascot 2YO Plate on February 16.

Trainer Dion Luciani said Amarillo Rose will then be tested in features races to determine whether she will be set for the G2 Karrakatta Plate (1200m) on April 6.  “She’s a leggy, big-striding, clean-winded filly,” Luciani told The West Australian.  “So you would assume she will continue to develop.”

The Olives bred Amarillo Rose from Newcastle winner Kezzabelle (Zabeel).  They retained her yearling filly by Alfred Nobel and she foaled an Awesome Rock colt in October.

Slater (Redoute’s Choice) has been sparingly used at Gold Front.  There are just four colts and four fillies in his juvenile division this season.

Hoofnote:  Luciani wasn’t at Ascot to saddle up Amarillo Rose – he elected to ride stablemate Booyah Boy at Kojonup’s annual picnic meeting.  The Haradasun gelding lumped 67kg to win a maiden by 14 lengths! 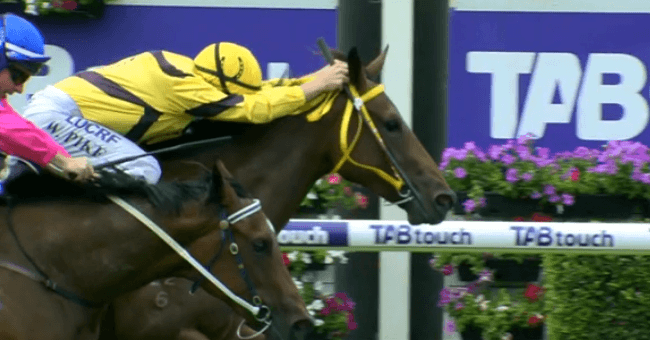