Home Sky’s the limit for Samizdat

Sky’s the limit for Samizdat

The sky’s the limit for Samizdat on the strength of an incredible win in the Magic Millions WA 3YO Trophy (1200m).

The Not a Single Doubt gelding first made headlines when topping the 2017 Perth Magic Millions.  A half-brother to G3 WA Champion Fillies Stakes winner Samovare, he was knocked down for $325,000 to the bid of Gangemi Racing.

Samizdat was bred and sold by Amelia Park and the Vasse nursery’s owner Peter Walsh retained a share.  He won on debut at Belmont as a late-season 2yo and was spelled before resuming at Pinjarra on Saturday.

“This has given me a great thrill,” Walsh said. ” He looks a very exciting horse and I must thank all the team at Amelia Park.  And full credit to Gangemi Racing.  We’re very excited about his future.”

The win was the fifth Magic Millions success for star jockey Jarrad Noske from just 11 rides in the rich feature races across his career.  “It was pretty relieving going over the line,” he said. “He got back a long way and he was off the bridle at the 600m.”

“He showed a pretty special turn of foot.  I haven’t felt that from a horse for a while.”

Scenic Lodge also celebrated the win.  The Muchea stud will present a Snippetson half-brother to Samizdat and Samovare as Lot 122 at the 2019 Perth Magic Millions on February 18.  The colt is being offered as agent for Scenic Lodge yearling manager Jamie O’Bree who welcomed another half-brother by Extreme Choice at Newgate Farm in October. 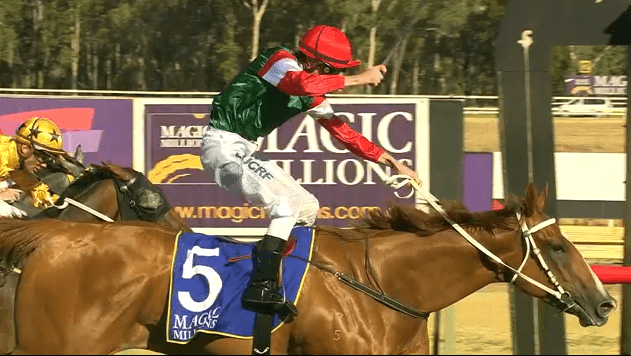