Jericho Missile has emerged as one of the new stars of WA racing after storming home in a thrilling edition of the Magic Millions WA 2YO Classic (1200m) at Pinjarra.

The untapped youngster gave leading trainer David Harrison a third win in the Classic.  The unbeaten son of Smart Missile was sent out the $3.10 third favourite in a tight market and proved too strong under champion hoop William Pike.

Jericho Missile had won his only previous outing at Ascot in the $100,000 Crystal Slipper Stakes on December 1.

Bred by David Bentata, Jericho Missile was pinhooked by Peter McIntyre for $22,000 at the 2017 Magic Millions National Foal Sale through the draft of Holbrook Thoroughbreds.

Maluka Thoroughbreds prepped him for the 2018 Magic Millions Adelaide Yearling Sale where he was sold to Harrison for $77,500.  “He’s pretty special and I just loved him from the first time I saw him,” Harrison told reporters after the win.  “I just had to have him and I didn’t care how much he cost.

Among the big team of owners in Jericho Missile is Harrison’s good friend and WA Greyhound Hall of Famer Linda Britton.

Jericho Missile’s half-brother by Vinery sire Press Statement has been catalogued as Lot 570 at the Inglis Classic Sale by Holbrook Thoroughbreds on Monday afternoon.  Their dam Onecatstoomany (One Cool Cat) foaled a filly from the first crop of Star Turn filly in October and was bred back to him at Vinery. 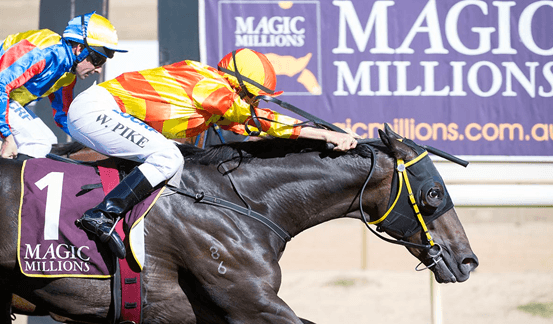