Classy 2yo filly Rio Del Mar and her stablemate Achernar Star have hoisted Amelia Park’s colours to a stakes-winning double at Ascot.

Amelia Park owner Peter Walsh and trainer Simon Miller are in rare form and Rio Del Mar is a filly going places after winning the G3 Gimcrack Stakes (1100m) on Saturday.  Perfectly ridden by Chris Parnham, she landed in the box seat and then burst through a gap in the straight for a half-head victory over Prim And Proper.

Her stablemate Amelia’s On Fire finished a length and change away in fourth spot.

“That was an excellent win,” Walsh said.  “They were debating which one would be the best horse and Simon leant towards Rio Del Mar.  He was right today but we will see what happens in a fortnight.”

Rio Del Mar (Magnus) was purchased as a foal for $20,000 at the 2017 Inglis Australian Weanling Sale by Walsh and fellow part-owners Mark and Peter Chadwick.  Her dam Costanera (Encosta De Lago) is an unraced three-quarter sister to Titanic Jack (G1 VRC Emirates Stakes).

Achernar Star (Gingerbread Man) completed a feature double for Walsh and Miller in the LR Grandstand Cup (1500m).  He was a coming off a LR Bunbury Stakes victory and has banked over $850,00 for a syndicate that also includes Adrian Harrod, Josh Hardy and Dan Jancec.

“He’s in a good space and Simon said it was the best he had ever worked on Tuesday morning,” Walsh added.  “We’ve been having a great run – particularly in the last 12 months – it’s been good fun.” 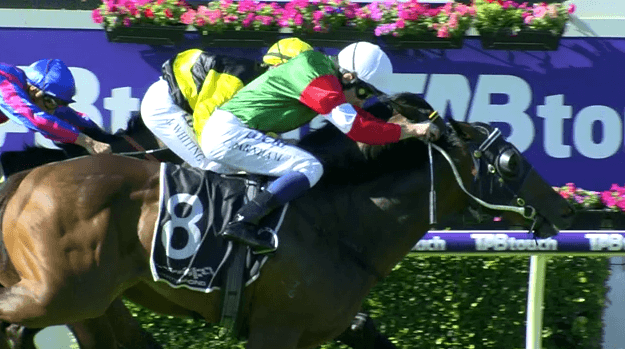