Trainer George Osborne has got a bit of time for Lazy Bear even though he accused the Globetrotter stallion of bludging at Ararat on Friday.

Lazy Bear responded to a vigorous ride by Linda Meech to collar Zoumanor (Zoustar) and Chorus (Snitzel) in the Farm Supplies Hcp (1300m).  “The two favourites put the speed on and that worked in our favour but Linda really had to lift him in the straight,” Osborne said.  “It looked more like L Dittman than L Meech!

“He was all over the shop and wanted to throw it away.  Even so, he did win and will keep improving over more ground.”

Lazy Bear is known as ‘Yogi’ around the stables and had won his maiden at Kyneton last month.  His sire Globetrotter (Street Cry) transferred from Victoria to Forrest Beach Estate at Capel in 2017 and his first WA foals are on the ground for south-west breeders Robbie and Colin Smith.

His latest winner is from Inflated Ponds (Inflate) who descends from Tasmanian trendsetter Bow Mistress.  She won everything in her home state and then crossed Bass Strait to win the G2 Liston Stakes at Caulfield.

Meech earned her percentage and a sling after getting the best out of Lazy Bear.  “He’s racing well although there were other things on his mind today,” she said.  “He didn’t want to go past Ciaran Maher’s filly (Typhoomerang).  I think he was looking for a girlfriend but when I called for an effort, he knuckled down and picked up the leaders.” 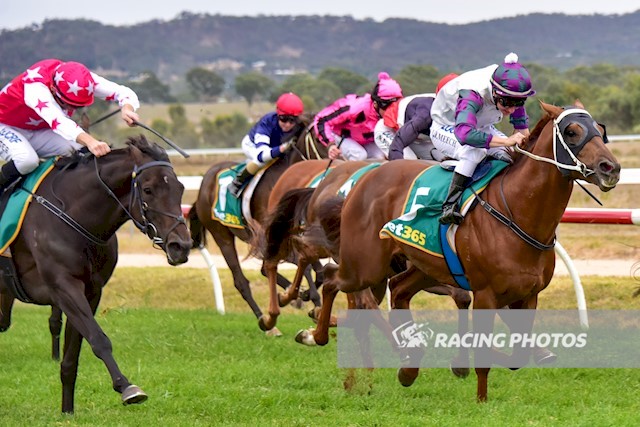