War Chant (USA) sired his 500th individual winner world-wide when Flat Biccy broke through for an overdue victory at Ascot on Wednesday.

Flat Biccy’s first-up win after a long spell wasn’t a fluke, either. He sat three-wide without cover and then got the better of I’m Pretty (Dash For Cash) after a duel down the straight.

“We always knew he had ability but there have been a few hiccups along the way,” co-trainer Rob Harvey said following the Morley Growers Market Maiden (1400m). “You have to be patient in this game and he will keep improving now that he’s found the line.”

War Chant’s 500 winners have won a total of 1,676 races in 34 countries. Leading the table with 262 winners is the USA from his days at Three Chimneys in Kentucky and there have been another 79 in Australia since his arrival at Yarradale Stud.

Flat Biccy is a big, strapping 5yo gelding with an extravagant action and has taken time to fully mature. “I was instructed to go forward and he was relaxed in neutral outside the leaders,” jockey Shaun McGruddy explained. “He’s improved 100% since I rode him last year.”

Queenslea Park’s Allan and Aaron Morton bred him from Last Reply (Euclase) and took him back home after failing to reach a reserve of $30,000 in Book 2 of the 2015 Perth Magic Millions. His dam won three races for Sharon Miller at Belmont up to 1700m.

The Mortons also bred War Chant’s star mare Dainty Tess who has been catalogued for the Magic Millions National Broodmare Sale starting on May 28.

Flat Biccy was the first-leg of a winning city double for War Chant. Later on Wednesday, Over There maintained her perfect record since resuming from a spring prep. She was an eye-catching winner down the Pinjarra straight last time and Neville Parnham produced her for another fast-finish to the Iron Jack Hcp (1200m).

Parnham won with War Chant sprinter Comparative last Saturday and he unveiled another Yarradale homebred at the trials on Monday. His 2yo colt War Saint is out of G3 Hyperion Stakes winner Ambers Halo (Don’t Say Halo) and there’s a fair amount of ability to work on following a winning hit-out over 400m at Lark Hill. 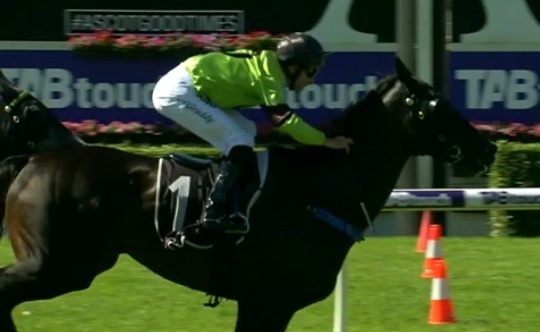