A day after Yarradale champion War Chant (USA) sired La Belle Jude to win in Melbourne, his local filly Over There scored a remarkable first-up victory in the TAB Touch Better Your Bet Maiden (1000m) at Pinjarra.

Over There settled at the rear of the field down the straight and was still spotting the leaders a half-dozen lengths when they linked up with the course-proper.

Jockey Craig Parnham eased off the outside rail and when he found a gap, the race changed complexion in a matter of metres. She weaved through the field with a burst of acceleration to win running away by over a length.

Now that’s she found the line, trainer Neville Parnham will find better races in 3yo company for Over There. She’s a homebred for Victorian couple Brian and Joan Durran who also raced Smart Twister (Hurricane Sky) with Parnham. He won five races at Ascot – the last of them the day Talent Show claimed the 2013 Perth Cup.

Over There’s dam Kelvin Rose (Redoute’s Choice) is from a half-sister to the Durrans’ star sprinter Regal Roller who won the G1 Sir Rupert Clarke Stakes, G1 Toorak Hcp and G1 Futurity Stakes at Caulfield in 2004-05.

The War Chant filly kicked off a winning afternoon for past and present Yarradale Stud stallions at Pinjarra on Thursday.  She was followed by her stablemates Rock This Country (Frost Giant) and City Circle (City Place) while Fetch More Ammo (Discorsi) filled out the four-timer for Muchea trainer Fenella Martin.

War Chant was in the news earlier this week when it was announced his Group 3 winner Dainty Tess had been retired. Trainer Dan Morton revealed the 5yo mare had developed knee complications and will be entered for the Magic Millions National Sale at the Gold Coast in May. 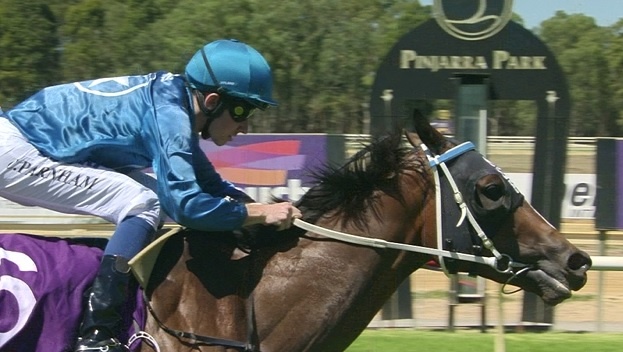