She arrived right on the line for part-owner and trainer Ash Maley who admitted he had been bullish about the mare despite a $21 pre-post quote.  “She ran a mighty race here first-up over 1600m last month,” he recalled.  “I could see she was winning at the 300m and roared myself hoarse.”

Skinnen Tins (4m Patronize – Flaming Magic by Brief Truce) won a 3yo winter maiden over a mile at Kalgoorlie in June last year and signed off with wins at Northam and York earlier this season.  She’s from a half-sister to G2 Perth Cup winner Real Love and G3 Asian Beau Stakes winners Suspicion and Heart Starter.

“This could be her prep,” Maley declared.  “And she’s going to be better over more ground.”

Patronize has a very promising sprinter named Nimble in Singapore.

Nimble is unbeaten in four starts and his latest victory in a Kranji Stakes (1200m) was accomplished against the odds.  He was asked to shoulder 59.5kgs and jump from the outside barrier of the 14-horse field.

Trainer Leticia Dragon and jockey John Powell doubted whether he could pull it off again in the red-hot turf contest.  But no-one told Nimble.

Half the battle was won shortly after dispatch when Powell nestled Nimble into the running line just worse than midfield.  Seeing daylight at the 400m, he exploded down the outside to quickly cover the leaders Flak Jacket and My Dreamliner.

“It was by far his toughest test, but what a great ride from J.P.  I’m over the moon!” Dragon said.  “It’s not easy to get four wins in a row nowadays and he sure proved he was a very good horse today.”

Nimble won on debut as ‘The Shoe’ at Pinjarra before transferring to Singapore where he has earned AUD 164,500 for MMW Stable.  His dam Grand Oscar (Grandera) won at Ascot and her older half-brother Cation won a LR Crawford Stakes at Belmont. 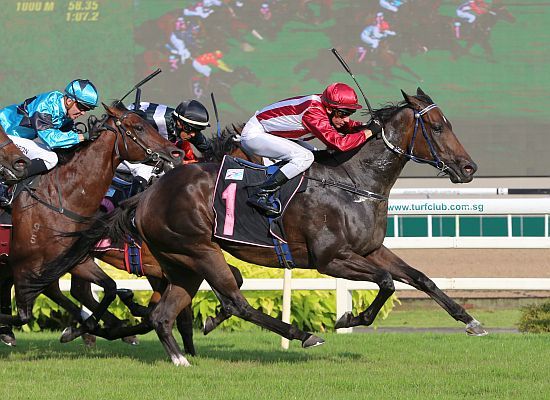