Perth filly On Fire in Victoria

Scenic Lodge sire Universal Ruler has another 3yo filly ready to make a mark in Melbourne following the runaway first-up win by Bam’s On Fire on Thursday.

Bam’s On Fire left Perth as the best maiden in Western Australia late last year and she shed that tag with a five-length victory in the Sam Miranda Wines Plate (1106m) at Benalla.

“That was very impressive – she did it easily,” jockey Harry Coffey said.  “She jumped cleanly, relaxed in front and then quickened like a nice horse.  She’s capable of winning better races than this.”

Coffey got the ride after Linda Meech broke a collarbone in a fall at Geelong on Wednesday.  “Thanks to Linda and Johnny Allen,” he told racing.com.  “Johnny told me to ring up for the ride and I was lucky enough to be the pilot today.  The track was a bit firm so I went easy late in the race.  She had a healthy blow and will keep improving.”

She rocketed home for third in the G3 Gimcrack Stakes after missing the kick by six lengths and then came from the tail of a capacity field to finish fourth in the G2 Karrakatta Plate.

Universal Ruler sired Bam’s On Fire from Im Your Fire (Holy Roman Emperor).  She’s the final foal of the NZ-bred mare who is from the immediate family of stakes winning stallions Shovhog and Shovoff. 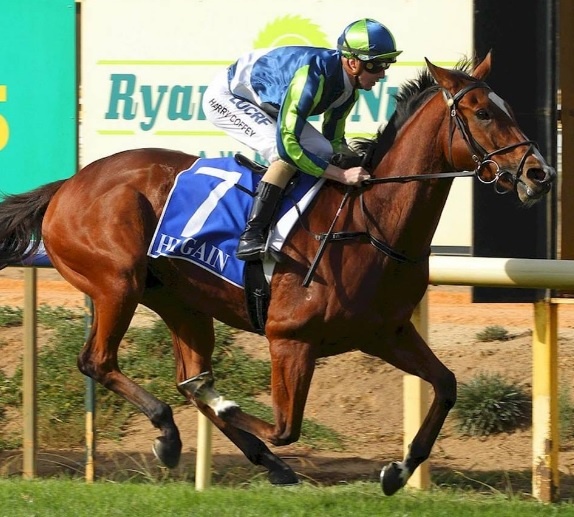