Home Durrants dine out on Blackfriars

Durrants dine out on Blackfriars

Scenic Lodge champion Blackfriars has been a reliable source of winners for trainer Adam Durrant and they don’t come much more honest than Come Play With Me.

He won last year’s LR Aquanita Stakes and LR Belmont Classic and a class edge saw him cruise home in the Cavalier Hcp (2100m) at Ascot on Saturday.  It sent his earnings past $537,000 for Durrant’s parents Geoff & Vicki and that includes Westspeed bonuses of $183,000.

“He’s a good horse and we’ve kept him fit since his last run a month ago,” stable foreman Jason Miller said.  “He wasn’t far away in the Bunbury and Pinjarra Cups and was dropping back from two miles in the WA Cup.”

Come Play With Me’s dam Russian Playmate (Dr Johnson) won a LR La Trice Classic and LR Starstruck Classic sporting the Durrant family’s green and gold silks and they also have his yearling brother by Blackfriars being educated at Karnup.

Mr Genoa is another Blackfriars money-spinner for the Durrants.  He won on debut at Northam earlier this season and they sold him for a significant six-figure sum to Victoria.

Now trained by Ciaran Maher and David Eustace, he gave nothing else a chance with a very impressive front-running victory in the Schurmann Electrical Hcp (1400m) at Hamilton last Thursday.  “The boys had been happy with his work at Ballarat and Caulfield and his trial at Cranbourne last week,” jockey John Allen said.  “He got into a lovely rhythm today and was just too good.”

Mr Genoa’s NZ-bred dam Jean (Volksraad) won once in 14 starts for Bob Peters and, after being sold for $22,000 in April 2009, went on to win another three races in Perth.  She has a 2yo filly (Ruby Jean) and a yearling filly by Blackfriars.

Blackfriars is making an impact as a broodmare sire with the likes of Perth stakes winners Red Ora, Darlington Abbey, Enchanted Dream, First Affair and Newton Prince.  His sixth in that category arrived on Saturday when Moor Gait was successful in the G3 SA Classic (2500m) at Morphettville. 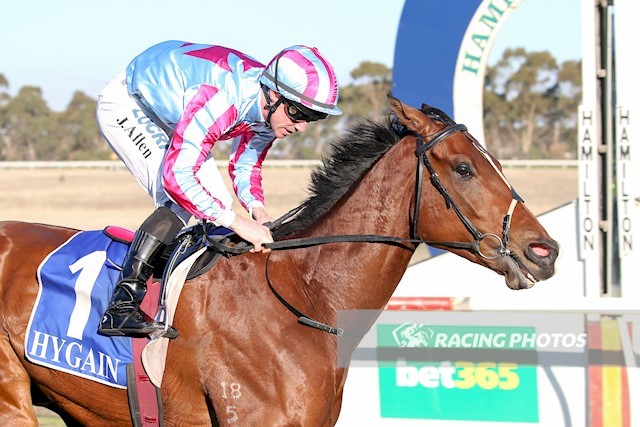