WA-bred galloper Ginger Jones returned to form with a vengeance when he outclassed a field of Benchmark 70 sprinters at Ballarat on Thursday.

The Gingerbread Man gelding was very impressive making amends for a forgettable run at Flemington last month. After settling in heavy traffic, Jamie Kah angled three-wide on the synthetic surface and he accelerated to a comfortable victory in the Hygain Winners Choice Hcp (1100m).

Ginger Jones (3g Gingerbread Man – Fiorentina by Dubai Destination) is a younger half-brother to Silent Sedition and races in the same interests as the Group 1 winning mare. Trainer Andrew Noblet bought him for $170,000 out of the Korilya Stud consignment to the 2017 Perth Magic Millions Sale.

“We lost one of the owners and a dear friend last week,” Noblet revealed. “Big George will be looking down with a big smile on his face. And a big shout out to the other boys watching at the Steak Bank in Ormond.”

“Ginger Jones has had a week or two on the water-walker to freshen up. That was a good race down the straight but he over-raced and was disappointing. He’s been going well at home and we were confident today.”

Jamie Kah had been aboard at her only other ride on the chestnut when they won a Cranbourne maiden in April. Dwayne Dunn took over when he doubled up at Ballarat and then Dan Stackhouse had the mount when he skirted the outside fence at Flemington.

“He has come back enormous,” she declared after weighing in at Ballarat. “It’s onwards and upwards from here.”

Seymour Bloodstock’s Darren Thomas purchased Fiorentina for $850,000 at last year’s Magic Millions National Sale. Silent Sedition (War Chant) was sold to Katsumi Yoshida for $1,500,000 a day later on the Gold Coast. She’s due to deliver a Snitzel foal in August. 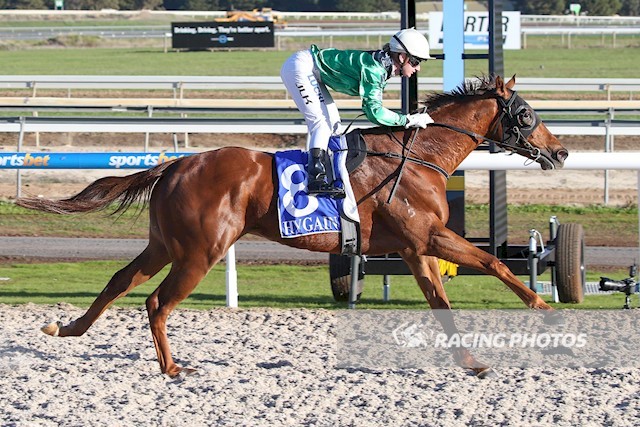