Valour Road will be sent for a spell following his latest black-type victory in the LR Bolton Sprint (1200m) at Belmont.

The Simon Miller-trained sprinter and his stablemate Special Reward will be set for the G1 Winterbottom Stakes at Ascot in November. Saturday’s win was his second feature success this time in following the G2 Euclase Stakes in Adelaide last month.

“He wasn’t suited today but was just too good for them,” Miller said. “His wheels begin to spin in the slippery conditions but Willie (Pike) was positive and built through the gears. It was a really good ride.

“I’m really proud of the horse. Adelaide was his grand-final and I’ve got to thank the owners for allowing me to keep him ticking over. He will go to Amelia Park for six weeks and that works perfectly for his next prep into the Winterbottom.”

Bred and part-owned by Yarradale Stud owner Ron Sayers, Valour Road was Champion WA 2YO in 2017-18 after claiming the RL Magic Millions Classic at Pinjarra and G2 Karrakatta Plate at Ascot. From 10 starts, he has now won 5 races for earnings of $842,600 and that includes a Westspeed bonus component of $93,600.

Former Yarradale Stud shutter Frost Giant (USA) sired him from Melba Avenue (Street Sense) who is a half-sister to Group 3 winner Raspberries (Lonhro). Sayers bought her as a foal from Darley and sent her back to the source for a cover to Exceed And Excel last year.

Frost Giant (Giant’s Causeway) shuttled to Yarradale for two southern books and is now recognized as one of the leading stallions in New York State. Based at Century Farm in Saratoga, he completed a stakes winning treble in as many days after Valour Road saluted in Perth. 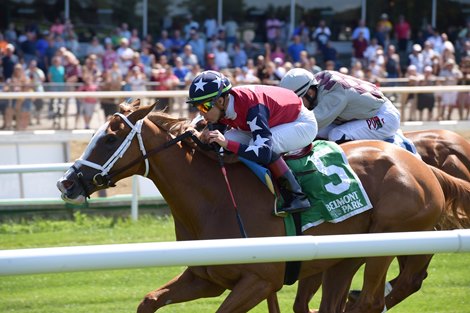