Alfred Nobel (Ire) has transferred from Bullsbrook to Serpentine where he will join Maschino at Alwyn Park Stud.

Capel-based trainer Lou Luciani and his partner Trish Roberts have purchased the Group 1 winner from Lynward Park.  Still only a 12 year-old, he will be based at Alwyn Park in association with studmaster John Andrew.

Luciani and Roberts have always rated Alfred Nobel highly and won this year’s LR Supremacy Stakes (1000m) at Ascot with his 2yo filly Prim And Proper. “She’s a tough little bugger and is doing us proud,” Luiciani said after banking valuable black-type.  “She’s as game as Ned Kelly.”

After making enquiries to book her dam Prima Vista (Invincible Spirit) and some other mares into Alfred Nobel, Lou learned from bloodstock agent John Chalmers that the stallion was for sale.

“I need a stallion like I need a hole in the head,” Luciani laughed when interviewed on Racing Radio last week.  “But the price was right and I couldn’t knock back the opportunity to buy him outright.”

Alfred Nobel has been priced right at a $2,200 service fee this year.

Initially shuttling from Coolmore Stud in Ireland, he has sired 94 individual winners of 253 races world-wide although the best of his stock have surfaced in Western Australia.

Prim And Proper is his third stakes winner here following Showy Chloe (G3 WA Sires’ Produce Stakes) and Fontainebleau (LR Belmont Oaks) while Winning Supreme has been the best of his WA-bred exports winning four races and HK$3.02 million for trainer Me Tsui.

Alwyn Park will be busier than ever this spring now that Alfred Nobel will stand alongside rising star Maschino whose recent books have trebled from his early days.  “He’s settled in without any dramas,” Andrew said.  “Lynward has added Mahuta and Bondi to its roster so I guess a third stallion might have been one too many.”

Alfred Nobel was Ireland’s champion 2YO in 2009 winning the G1 Phoenix Stakes and G2 Railway Stakes.  His sire Danehill Dancer also won a Phoenix Stakes at Leopardstown and among his more successful sire sons have been Mastercraftsman and Choisir.

His dam Glinting Desert (Desert Prince) is from the immediate family of G1 English Derby winner New Approach (Galileo) and they descend from Champion Irish 2YO and 3YO Filly Park Express (Ahonoora). 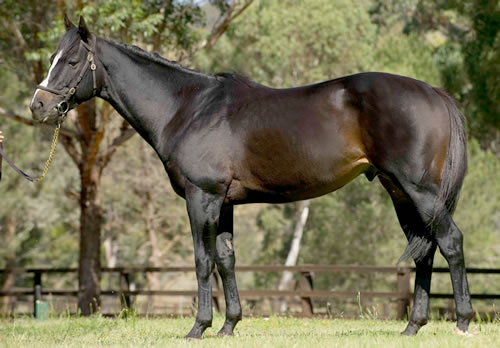