Cryptic Wonder gave My Admiration the first leg of a 2yo double at Belmont when he was a very impressive debut winner last Saturday.

My Admiration (Encosta de Lago) stands at Westbury Park in Pinjarra and he struck again with 2yo filly Ration Aly on Wednesday.

Cryptic Wonder settled on the fence behind the leaders and then forced his way into the clear to defeat No Apology (Declaration Of War) and That’s Funny Az (Snippetson) in the Go Racing For Free Plate (1200m).

“He’s a big, tall boy and we’ve had him in and out of work while he’s thickened out,” co-trainer Grant Williams said.  “He earned good coin with the bonus today but won’t be pushed.  He will only have one more run before a break.”

Cryptic Wonder is a younger brother to Cryptic Love who has won twice at Ascot and was also fourth home in the RL Magic Millions 3YO Trophy at Pinjarra in February.

Westbury Park owner Phil Ibbotson bred them from Abitcryptic (Bletchley Park) and the mare has a filly foal by Lucky Street.  Cryptic Wonder made $30,000 through the Western Breeders Alliance consignment to the 2018 Perth Magic Millions and earned $88,000 first-up for a syndicate managed by Elio and Jacquie Galante.

“He switched on going into the barrier and has got a racing brain,” jockey Willie Pike said.  “He won with his eared pricked and there was a bit left on the line.”

Ration Aly did it the hard way when posted without cover in the Free School Holiday Fun Hcp (1400m) on Wednesday.  “She had to work but still got the job done,” part-owner and trainer David Harrison said.  “She’s on the way up and will mature into a nice filly after a spell.”

Ration Aly was bred by Kim Loxton at Ferrari Breeding & Racing in Serpentine.  Her dam Quality Spirit (Elusive Quality) is an unraced half-sister to Adelaide stakes performer Lady Dynamo (Catbird) and she has a yearling colt by All American named Yank.

My Admiration is currently a Top 20 stallion on the Australian second-season sires’ premiership with 13 individual winners of 20 races and $673,525 in earnings.  He stands at Westbury Park for a $4,750 service fee. 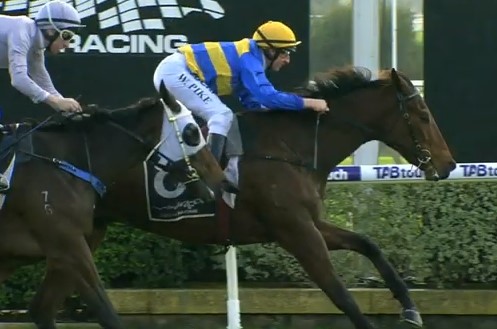