WA-bred G1 Caulfield Cup winner Boom Time has been retired and will cover his first mares in Victoria this year.

He will be based at Rangal Park Stud in Euroa alongside veteran Danehill stallion Danerich.

Boom Time (Flying Spur – Bit of a Ride by Snippets) began his black-type career for owner-breeder Kim Loxton and trainer Trevor Andrews in the 2015 LR Melvista Stakes (2200m) at Ascot before transferring east to Lindsay Park.

Sidelined for 12 months with a tendon injury, he returned to complete a winning hat-trick at Flemington and then added his first black-type victory for trainer David Hayes in the LR Mornington Cup Prelude (2000m).

Loxton sold him to Lindsay Park before Boom Time reached a career high in the $3.15 million Caulfield Cup (2400m) in October 2017.  “What a great result and special thoughts with Kim who is a great friend of mine,” Hayes said.  “He’s overseas at the moment and we will have a celebration drink when he gets back.”

Loxton operates Ferrari Racing & Breeding in Serpentine and raced Boom Time’s dam to wins at Ascot, Belmont, Pinjarra and Kalgoorlie before her close relation Black Caviar sent the pedigree through the roof.

Bit of a Ride has a yearling colt by All American that made $80,000 at this year’s Inglis Melbourne Premier Sale. 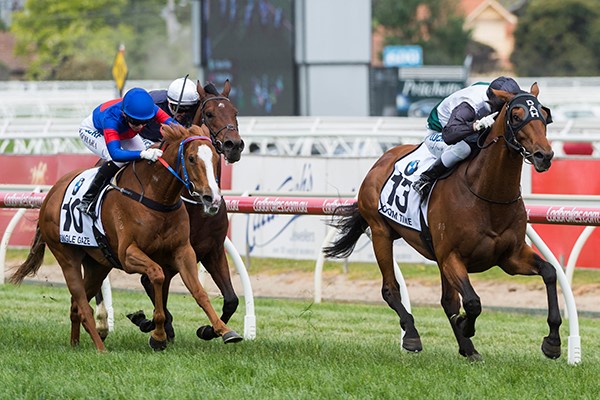