Neurological punches well above his weight and that will count for plenty when he heads to Kalgoorlie for the LR Hannans Hcp (1400m) in October.

The 4yo son of Yarradale Stud sire Gingerbread Man earned a trip to the Goldfields after overcoming a chequered passage in the Crown Perth Hcp (1400m) at Belmont on Saturday. He settled in the box-seat but Willie Pike’s plans to follow Red Paddy into the race were foiled when that horse hit a brick wall. Taxagano took advantage and pinched a two-length break before being collared right on the line.

Neurological cost part-owner and trainer Martin Allan $20,000 out of the Yarradale draft to the 2016 Perth Magic Millions and he’s now banked $243,020 from 8 wins in 17 starts. He purchased the horse with the help of an inheritance from his father who died of Motor Neurone Disease.

“He’s a pretty smart horse to do what he did today,” Allan said. “He’s only 410kg but he’s got a big engine. I will give him 10 days in the paddock and set him second-up for the Hannans.”

A Hannans victory would complete a hat-trick of country features following the Fitzgerald Plate at Albany and Batavia Sprint at Geraldton earlier this year. “He got out of trouble and made me look good,” Pike admitted after weighing in. “We lost momentum and it was very good win considering the sticky surface.”

Neurological is the first foal of First Game (Soldier’s Tale) who won a Northam maiden for Yarradale owner Ron Sayers. Martin has leased her yearling filly by City Place (USA) from Yarradale and the mare was bred back to Gingerbread Man last year.

They notched a double at Belmont on Wednesday with Salcity (City Place) and Ice Maker (Discorsi) and filled out a trifecta in a Northam maiden on Thursday when Blitz ‘em Bootz (Frost Giant) led home Amillionite (War Chant) and Data Lake (Discorsi). 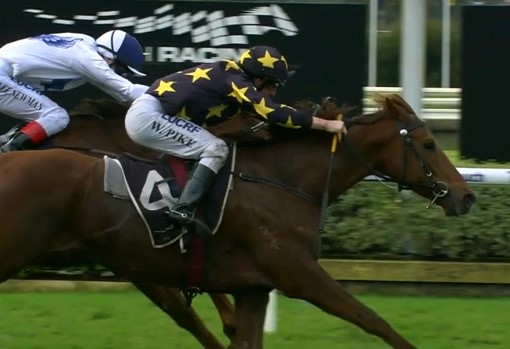