Looks Like Elvis booked a trip back to NSW after trouncing his rivals in the Ascot Green Hcp (1600m) at Eagle Farm on Saturday.

The versatile All American galloper camped on the speed and then took a rails run in the straight to win pulling up under a canny ride by apprentice Nick Keal. He scored by more than two lengths from Trevelyan (Pierro) and Irish-bred import Kings Full (Galileo).

Looks Like Elvis was a $110,000 buy for trainer Bryan Dais at the 2016 Inglis Classic yearling sale on behalf of owners Jim Critchley and Craig Morrissey.  He was coming off a narrow loss in the Coffs Harbour Cup (1600m) and the G3 Newcastle Cup (2300m) is now on the radar.

“He will have another start over 1800m here in a fortnight before going to Newcastle,” Dais said. “The Coffs Harbour Cup was only his third run this campaign and we used Nick’s claim after he was allotted a massive 61.5kg today.

“The 2300m is a query at Newcastle but he’s had two runs at 2000m and arguably should have won both when I took him down to Randwick and Flemington.”

Geisel Park stallion All American sired him from NZ mare Savalook (Savabeel). She also foaled All American mare American Diva who has won 8 races in Queensland and NSW following a last-start victory at the Sunshine Coast.

The Eagle Farm result brought up a treble for All American on Saturday following the wins of Lass Vegas and Villicana on the provincial circuit in NSW.

Geisel Park graduate Rocky Path was also in the frame at Belmont on Saturday winning the Singapore Turf Club Trophy (1200m) for trainer Vaughn Sigley. She is a 3yo filly by Therock (Fastnet Rock) who stood at Waterford Stud in Waroona before transferring to Victoria.

All American (Red Ransom) stands for a service fee of $6,600 alongside Vert de Grece ($5,500) whose first crop of yearlings will be catalogued for the 2020 Perth Magic Millions. 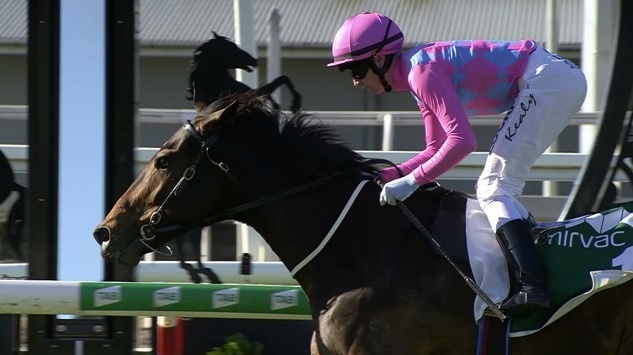 LOOKS LIKE ELVIS
All American galloper bolts in at Eagle Farm