Home Tapping into A Lot

Tapping into A Lot

Gainesway Farm champion Tapit is going tit-for-tat with Spendthrift star Into Mischief for this year’s USA sires’ premiership as the current racing and sales season at Saratoga comes to a close on Monday.

Tapit has won three of the last five titles and he hit the front in 2019 when Highest Honors won the LR Curlin Stakes in the first week of the Saratoga meet.  Into Mischief regained the ascendancy when dynamic filly Covfefe won the G2 Test Stakes at the Spa but the lead looked like changing again when Tapit colt Tacitus lined up as favourite for G1 Travers Stakes last weekend.

The Travers is worth $1.25 million and a walk-up start at stud but Tacitus found one better when Code Of Honor claimed the ‘Midsummer Derby’ in Upstate New York.

They will remove to the Big Apple and renew Group 1 hostilities in the $750,000 Jockey Club Gold Cup at Belmont Park on September 28.  That showdown could also prove decisive for the sires’ title being a ‘Win and You’re In’ qualifier for the $6 million Breeders’ Cup Classic at Santa Anita in November.

Tapit’s longevity at the top-end of the market – he stands for a $225,000 fee at Gainesway – will buoy Australian breeders supporting his two locally-based USA-bred sons Frosted and A Lot.

Frosted has his first crop conceived at Darley Victoria going to the Australian yearling sales in 2020 and A Lot has his first foals on the ground at Mungrup Stud in WA.

Tapit has a rising tide of young sons in North America.  He’s already the sire of Group 1 stallions Tapizar and Concorde Point and is now making further inroads with his freshmen Constitution, Tapiture and Race Day.

The trio are all Top 10 sires for the USA first-season premiership this year.  Constitution starred at Saratoga with By Your Side (G3 Sanford Stakes) and at Del Mar with Amalfi Sunrise (G2 Sorrento Stakes).

Tapit sired another untapped 2yo at Saratoga last Thursday when Enforceable broke his maiden for long-time successful owner Jack Oxley.  The Kentucky-bred colt from Justwhistledixie (Dixie Union) is a brother to Group winners Mohaymen and Kingly.

Kingly is trained by Bob Baffert and will be favoured to credit Tapit with the winner’s share of a purse worth $250,000 in the G2 Del Mar Derby on Sunday.

This month’s Fasig-Tipton Saratoga Yearling Sale was another triumph for Tapit.  His colt from Group winner Feathered (Indian Charlie) topped the leader-board at $1 million when purchased by West Point Thoroughbreds from Lane’s End Farm.

“He is by Tapit and we love Tapit,” said West Point President and CEO Terry Finley.  “He’s a great physical specimen.  We thought we would have a good shot at that level and are glad we had the winning bid at the hammer drop.”

The top filly – also by Tapit – made $950,000 to the bid of owner Scott Heider.  She was catalogued by Gainesway and is a half-sister to Group 2 winner Annual Report.

“She’s a filly with great potential from a great family and she was aggressively pursued by three leading buyers,” Gainesway’s Michael Hernon said.  “She’s a daughter of Tapit who speaks for himself.  It’s all there.  The pedigree is there, the physical is there she has a lot of class.”

Back in Australia, Frosted stole the show at the Darley Victoria open day last weekend.  “People are naturally drawn to him and he paraded extremely well,” Australian managing director Vin Cox said.  “He’s always a crowd pleaser and we have some cracking colts and fillies by him on the farm.”

The first foals by A Lot are stretching their legs at Mungrup Stud in the Great Southern.  Among them are a ‘precocious’ colt from Majantic (McFlirt) and a ‘ripper’ colt out of My Classy Lady (Oratorio).

His early-season fillies includes the first live foal from Cadenza (Oratorio).  She won the 2014 Magic Millions 2YO Classic at Ascot and is from a half-sister to Barely A Moment (G1 VRC Sires’ Produce Stakes & G1 Toorak Hcp).

“We were specifically looking for a different option to the Danehill and Northern Dancer lines.” Mungrup Stud’s Gray Williamson said. “Tapit is red-hot right now and this son of Tapit fits the bill for WA.

Ä Lot won two stakes sprints at Belmont Park and was denied a Group 1 when beaten a length by Tourist in the Fourstardave Hcp at Saratoga.  Jockey Javier Castellano lodged a protest for interference but it was dismissed by stewards. 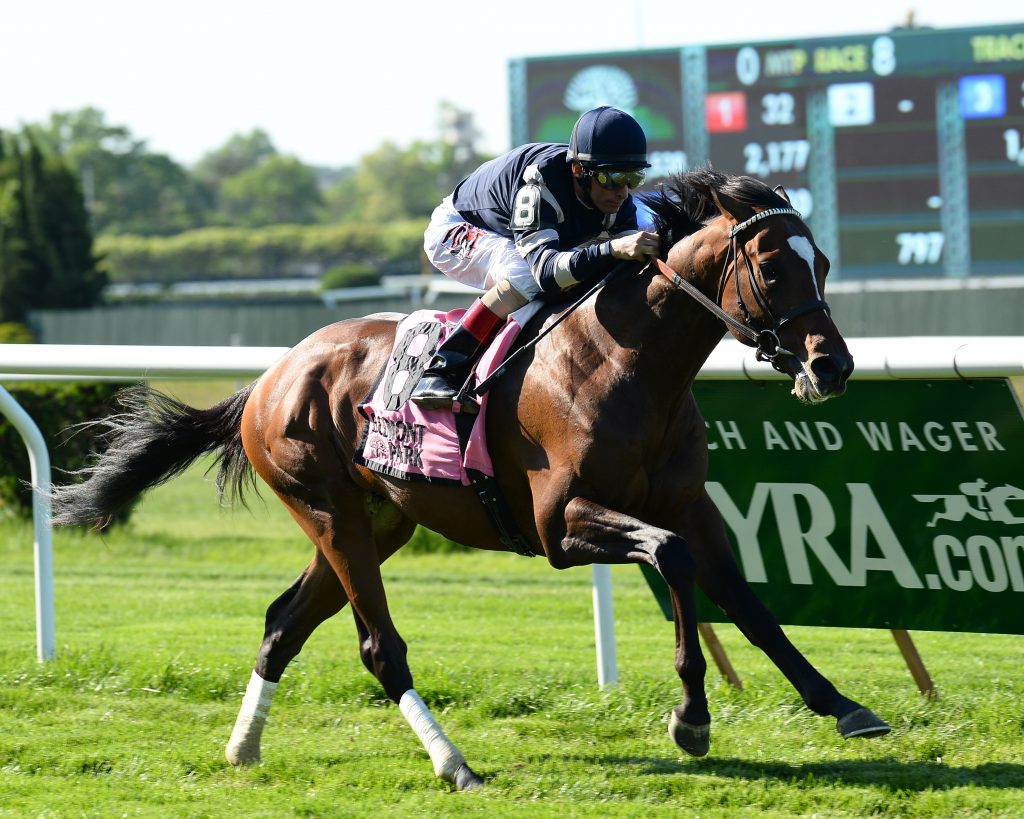