Mungrup Stud stallion Playing God sired his third winner in four days when Kay Cee graduated from the midweeks to a clear-cut victory at Belmont on Saturday.

Kay Cee’s running double came hot on the heels of a Playing God brace with Pletto and Heavenly Affair at Belmont on Wednesday.

Peters Investments first-starter Superstorm dominated betting as an even-money favourite on Saturday but he was no match for the winner who launched an ultra-impressive finishing burst in the TAB Touch-Better Your Bet Plate (1300m).

Kay Cee (3f Playing God – Flirt ‘n’ Hope by McFlirt) is prepared by Neville Parnham and he was confident even though the filly went to the barriers as a $27 outsider.  “Her maiden win indicated she’s good and we haven’t got to the bottom yet.  There’s a lot of upside and she’s going places this horse.”

Parnham will give her a break and come back for Ascot’s opening meeting on Saturday, October 12.  All going well, she will be set for the LR Burgess Queen Stakes (1400m) on Melbourne Cup day, November 5.

Winning jockey Steve Parnham is looking forward to continuing his association with Kay Cee.  “We decided to let her drop out because there looked to a bit of speed in the race.  She’s a good chaser and has a lovely turn of foot.  A mile shouldn’t be a problem later this prep.”

Owner-breeders Greg & Kathy Edwards have been winning with Kay Cee’s family for generations.  They are currently on holidays and listened to the broadcast in Europe.

Playing God’s winning start to the season coincided with a number of new arrivals at Mungrup Stud in August.  Among them are his filly foals from Wild Ruby (Vital Equine), Vampi Lass (Bletchley Park) and Boutique (Discorsi). 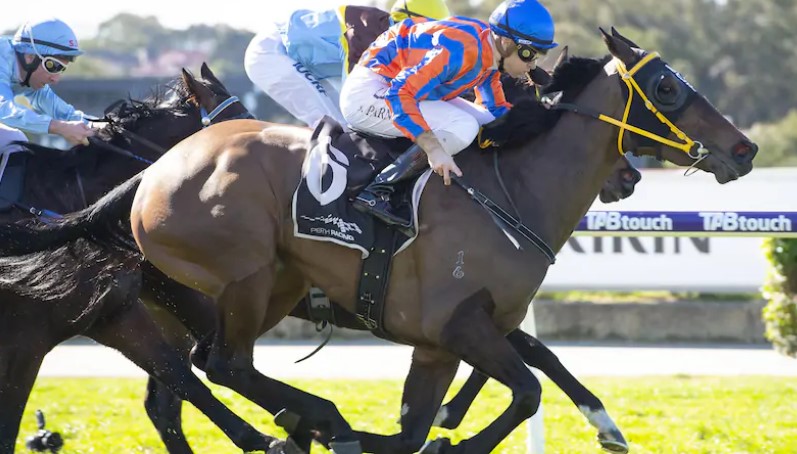