West Australian mare Arcadia Queen made light work of her Sydney rivals when racing first-up in the G2 Theo Mark Stakes (1300m) at Rosehill on Saturday.

In action for the first time since winning the G1 Kingston Town Classic (1800m) at Ascot last December, she improved from midfield on the rails into the home turn before cruising home for owner-breeders Bob and Sandra Peters.

“She’s a star alright,” winning jockey James McDonald said.  “She feels every bit as good as she looks and there is so much improvement left in her.  She’s push-button and is beautiful to ride.  A bit like Winx.  I won this race on her in 2015.”

Initially under the tutelage of Grant & Alana Williams, she was transferred to Chris Waller after winning all bar one of her six starts in Perth.  “I felt a little bit of pressure today for the first time since Winx retired,” Waller admitted.  “It was good to get that feeling back.

“She’s done a great job first up but we’re keeping a lid on expectations.  I told Bob everything had gone to plan and left it at that.  He sent her over early so we’ve had the whole prep to learn about her.

“I doubt she will run again before The Everest.  We will just try to keep her sharp.”

Arcadia Queen is the sixth foal to race and sixth winner for Arcadia (Redoute’s Choice).  Her earlier foals include the stakes winners Arcadia Dream (Domesday) and Arcadia Rose (Kheleyf). 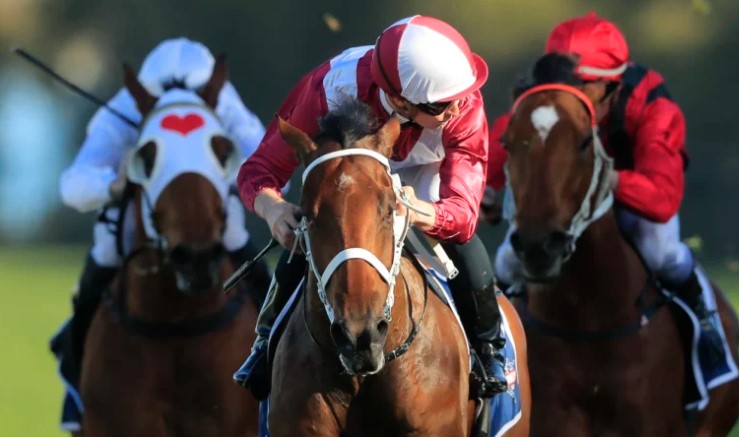