Jim and Trish Anderson are being rewarded for their faith in Encosta de Lago stallion Maschino.

They stand him for a $4,950 fee at Alwyn Park and he’s flavour of the month after three winners in the opening week of Ascot’s new season.  They range from explosive sprinter Fabergino to those going longer like Cup Night and Cockney Crew.

Cup Night won the Crown Courtyard (1400m) on the opening day with some sizzling sectionals but will dodge a summer campaign.  “He’s still only three and will definitely go to the paddock,” part-owner and trainer Bernie Miller declared.  “We may run him in the Northam Cup but he’s too immature to take on those carnival horses.

“We’re hoping to be back for next year’s Railway.  And the one after that!”

The Andersons struck twice at Ascot on Saturday starting with front-runner Cockney Crew in the Amelia Park Hcp (1800m).  He’s a high-cruiser and was only just beaten by Regal Power in the G2 WA Derby in April.

Cockney Crew blew them away by 8 lengths first-up before a blip when beaten by Taxagano.  “That makes up for last time,” trainer Kieran McDonagh said.  “He’s a fighter.  He lets them come again so he can have another battle!”

The LR Ascot Gold Cup (1800m) on November 16 is the next target for the free-wheeling chestnut who is a homebred from Happily.  The Australian-bred Galileo mare cost $20,000 out of a 2013 Patinack Farm dispersal and she has a 2yo filly and a yearling filly Maschino.

Fabergino earned coveted black-type when she completed a Maschino double in the LR Crawford Stakes (1000m).  She has never been beaten in five first-up assignments and was always in control to defeat Stageman (Written Tycoon) and Flirtini (Artie Schiller).

“It’s been a long time in the making.  We set her for this race back in May,” trainer Tiarnna Robertson revealed on Saturday.  “It’s fantastic to get this win for her owners and for her breeding career.”

The Anderson bought into the family when purchasing her dam Miss Razyana (Danzero) for $36,000 at the 2013 Magic Millions National Sale.  Former WA bloodstock agent Michael Flannery did the bidding at the Gold Coast and he had also been involved when they bought Maschino as a yearling for $240,000 at the 2009 Inglis Easter Sale.

Maschino won 7 races and trainer Graham Yuill paid tribute to the Andersons after his Group 3 victory in the 2012 R J Peters Stakes (1500m).  “They have stuck by this horse,” Yuill said.  “He’s always had a lovely presence about him and a great brain.

“He fell at his second start and then a hoof abscess stopped his next prep.  He was so big and needed time to mature but they continued to be patient.” 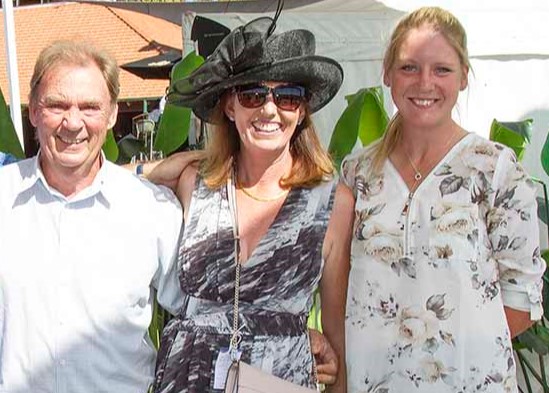