Home Brad and Bart in form for Cox Plate

Brad and Bart in form for Cox Plate

A week of mixed emotions for Scenic Lodge will be a mere memory if Black Heart Bart wins the Group 1 W S Cox Plate (2040m) at Moonee Valley on Saturday.

Black Heart Bart was the form weight-for-age horse at the Caulfield carnival and is being freely quoted at $26 for Australia’s $5 million weight-for-age championship.  He’s made a remarkable return from retirement to once again make a mark at racing’s elite level.

The 9yo son of Scenic Lodge champion Blackfriars scored an upset win in the G1 Underwood Stakes (1800m) last month and was then beaten a nose by Cape Of Good Hope in the G1 Caulfield Stakes.  His comeback mirrors that of jockey Brad Rawiller who was sidelined with neck fractures following a race fall last year.

“We’ve both been through the wars, I guess, and we’re going into the Cox Plate in great form,” Rawiller told AAP.  “I’m very excited and I know we’re in the race with a genuine chance.”

Black Heart Bart’s managing owner Kim Renner and fellow members of the partnership paid a $200,000 late entry to get a run on Saturday.  “He’s been my mate for a long time,” Rawiller added.  “I actually had to forgo some genuinely good rides early on this preparation to stick with him.”

Rawiller revealed Black Heart Bart’s troublesome feet are back to normal after his short-lived retirement.  “He hadn’t been quite right for over a year.  He would still run terrifically well but he lacked that killer punch.  They’re back to being 100% now and he will certainly be competitive this Saturday.”

Scenic Lodge sire Snippetson has a runner of his own over the odds at Moonee Valley with $26 outsider Queen La Diva in the G3 Tesio Stakes (1600m).  She is a last-start Pakenham winner and earned black-type earlier this year when placed behind The Inevitable in the LR Tasmanian Guineas.

The Velvet King, a multiple stakes winner by fellow Scenic Lodge sire Universal Ruler, added a Group 3 to his record in the Northerly Stakes at Ascot last Saturday.  However, the thrill of earning a start in the G1 Railway Stakes was tempered when Universal Ruler mare Lady Cosmology tore a tendon in the same race.

Lady Cosmology retires to stud as a stakes winner of the G3 Proud Miss Stakes in Adelaide and the LR Supremacy Stakes and LR Burgess Queen Stakes at Ascot.

Meanwhile, Universal Ruler mare Angelic Ruler will stay in Melbourne for the G1 Empire Rose Stakes (1600m) at Flemington on Saturday week, November 2.  She is due for a change of luck after six placings in a row in Group company over there this year! 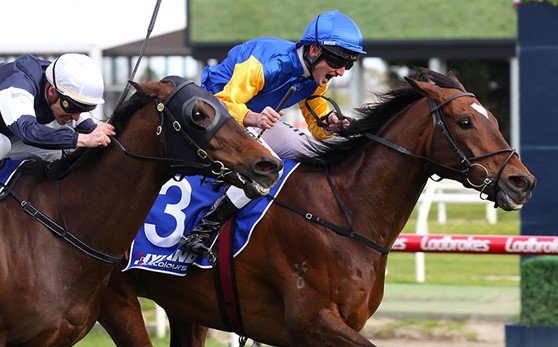