Oakland Park and Damien Oliver turned the clock back to the glory years when Pushin’ Shapes landed a long-shot victory at Caulfield on Sunday.

Pushin’ Shapes continued a successful spring for WA at the G1 Underwood Stakes meeting in the Le Pine Funerals Hcp (1700m).  He benefited from a superb ride and only went around one horse before taking over in the final furlong.

Oliver donned the same yellow and black colours that he wore on Oakland Park champion Northerly in the 2001 Underwood Stakes.  “It was a nice surprise.  He probably hasn’t been in the best of form but presented well today,” Oliver said.  “It’s great to win in the old Northerly colours for Neville Duncan and the West Australian connection.”

Northerly (Serheed) doubled up in the Underwood with Greg Childs steering in 2002.

Pushin’ Shapes (7g Viscount – Smooth Mover by Suave Dancer) was appearing interstate for the first time and his 8th win 48 starts sent his prizemoney to $597,000 which includes $55,000 in Westspeed bonuses.  He won an Ascot juvenile on debut in February 2015 and earned his first black-type with a record-breaking victory in last year’s LR Northam Cup.

Co-trainer Daniel Pearce admitted he told the owners to wait and see how Pushin’ Shapes went first-up in Melbourne before travelling across from Perth.  “I guess I might be in a bit of trouble.  To tell you the truth, I’m a bit stumped and very pleasantly surprised.”

Viscount sired another winner from the same crop as Pushin’ Shapes when Beaucount scored at Belmont on Saturday.  It completed a running double for former Oakland Park stallions following Rogano gelding Taxagano.

Viscount’s sole foal from his final crop is a 2yo colt named Solamente.  He’s a brother to multiple stakes winner Tick Tick Bloom.  Rogano (Redoute’s Choice) is currently covering his first book at Boallia Farm for a $4,400 service fee. 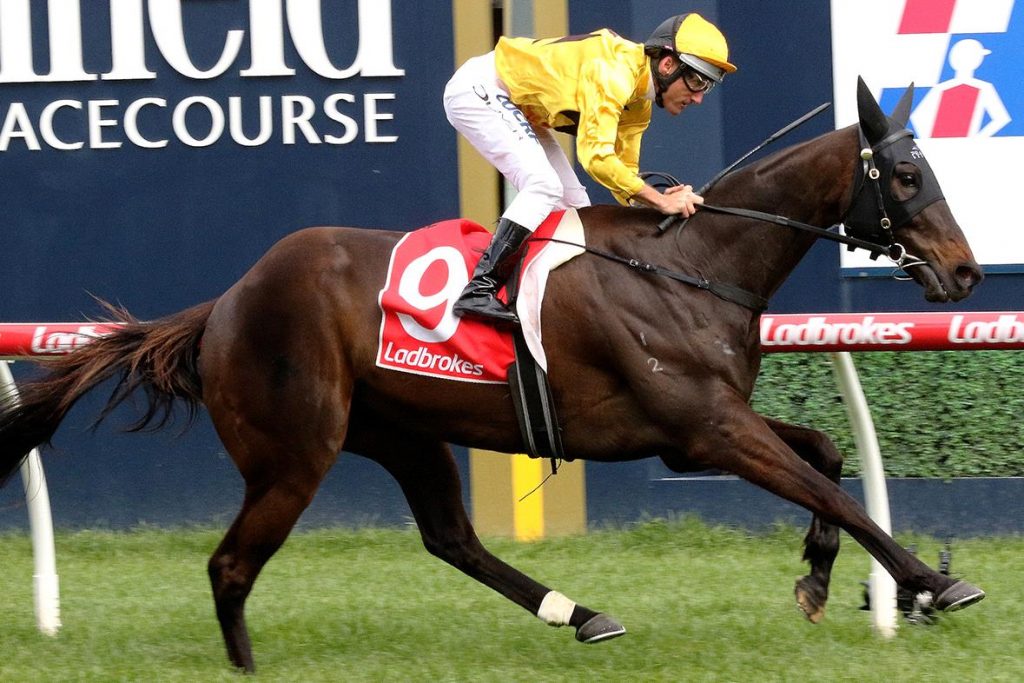