Kaplumpich completed a day to remember for the Corstens family in the McKellar Mile (1600m) at the stand-alone Ballarat Cup meeting on Saturday.

The All American 4yo is trained by Kevin Corstens at Cranbourne and followed Titan Blinders (All Too Hard) who is prepared by Leon and Troy Corstens at Flemington. Kevin can’t remember training a winner on the same day as his father and brother.

“It’s a great day for the family and what a day to do it,” he said. “This horse tries every time he comes out. He’s just so tough.”

Kaplumpich won twice at Moonee Valley this time last year and two subsequent stable transfers hasn’t hampered his progress. After changing hands for $70,000 at the 2017 Adelaide Magic Millions, he’s banked $232,870 with more rewards ahead for a syndicate managed by Brae Sokolski.

“He likes the beach down here and just loafs around in a big open day yard,” Corstens continued. “It never matters what I do with him – back off or get back into it – he copes with everything.

“He’s won over a mile now and we’re getting into better races. I’m sure he will get over 2000m down the track.”

Jockey Mark Zahra is predicting more wins for Kaplumpich. “He’s going really well and when I needed it, he found a couple of lengths today. That’s a good sign going forward.”

Meanwhile, All American’s Brisbane stayer Looks Like Elvis is coming to the end of his road trip down south. After doubling up at Eagle Farm in September, he ran a creditable sixth in the G1 Turnbull Stakes at Flemington and following up with placings on Cox Plate weekend and at the Melbourne Cup carnival.

Trainer Bryan Dais took him to Kembla Grange for the $1 million The Gong (1600m) on Saturday but he was never in the hunt from a wide barrier. He over-raced and had to be steadied off heels passing the 900m before coming in with the tailenders.

All American’s up-front start to the season in Perth continued on Saturday with his fillies Our Danni and American Choice filling out the placings behind Starfield Impact (Demerit) in the Crystal Slipper Stakes (1100m) at Ascot.

His first 2yo crop bred in WA at Geisel Park has hit the ground running and he’s in the Australian Top 10 2YO sires’ table with two winners and a placegetter from three starters. 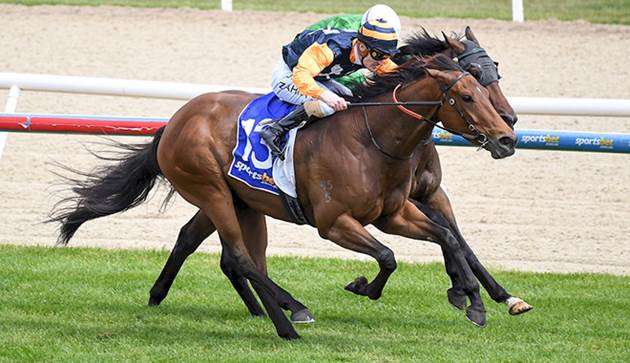