Mogumber Park sold him as a yearling for $52,000 at the Swan Valley Sale in February and his value escalated to $550,000 at Karaka.  That’s some mark-up although top billing didn’t come as a complete surprise to Bullsbrook-based Mogumber Park owners Colin Brown and Fiona Lacey.

“When we first brought them in for the yearling sale, I didn’t think he was going to be one of our more glamourous lots at the Magic Millions,” Lacey recalled.  “But the more we went into the prep, the more he started to look the part. As he developed and filled out everything came together and we could see he was turning into a great-walking, athletic colt.

“There was plenty of interest on the sale grounds.  People liked him and there were lots of scope requests from interstate buyers.  Steve Davis picked him as a good ready to run opportunity and sent a few potential buyers our way. He obviously kept improving so I can understand him going for that money in New Zealand.”

Sydney-based agent Andrew Williams, acting for a client of Lindsay Park, rated him the best horse in the catalogue at Karaka.  “Physically, we thought he was head and shoulders above anything else we inspected.  We also rated his breeze-up as the best of the sale.  He’s just a special horse and I genuinely thought he was going to make up to $500,000.”

His dam Exchanges (Domesday) was a $72,500 buy for Mogumber Park at the 2014 Magic Millions National Broodmare Sale.  Trained by Lee Freedman for Sheikh Mohammed, she had won at Sandown Hillside and earned black-type when runner-up in the 2011 Tasmanian Oaks.

Exchanges doesn’t have a yearling for the 2020 Perth Magic Millions but she has a cracking Rommel colt at foot and the Mogumber Park team is confident of another successful sale with its sires Safeguard and Rommel.

Safeguard (Exceed And Excel) was a Group 3 winner of the Kindergarten Stakes at Randwick and Vain Stakes at Caulfield and he clinched Western Australian 2yo and first-season sire honours in 2018-19. He was also 7th on the National 1st Season Sires list in spite of only having 30 live foals in his first crop. His winners to runners ratio is approaching 50% with only two crops of racing age.

“Safeguard has made a great start to his stud career and he sired another double last weekend,” Lacey said.  “His second crop averaged $86,000 earlier this year and trainers love them because they’re good doers and typically have great heads on their shoulders.”

Rommel (Commands) has his first yearlings catalogued for the 2020 Perth Magic Millions and among the highlights are the colts from Coast To The Post (Anabaa), Girl In A Storm (Metal Storm) and Chickitty Chick (Tobougg).

“He’s a beautiful horse and is stamping them with the same athletic build and temperament,” Lacey explained.  “His progeny don’t look quite as precocious as the Safeguards but those over the right mares will go early.”

Rommel was an Ascot winner on debut at two and extended to win the G2 WA Guineas (1600m) at three.  Following a freshen-up, he travelled to Melbourne where he proceeded to upstage their best summer sprinters in the G3 Zeditave Stakes (1200m) at Caulfield.

Trainer Neville Parnham, who prepared War Saint to win last Saturday’s WA Guineas, believes Rommel will make the grade as a stallion.  “He’s a quality horse.  Big and strong but a gentleman around the stable.

“Commands was a dominant stallion and when I inspect the yearlings by his son Epaulette in the Eastern States, they remind me of Rommel when I first saw him as a yearling.”

Buyers can take advantage of the quality and value throughout the 331 lots that Magic Millions has catalogued for the Perth Yearling Sale on Monday and Tuesday, February 17 and 18. 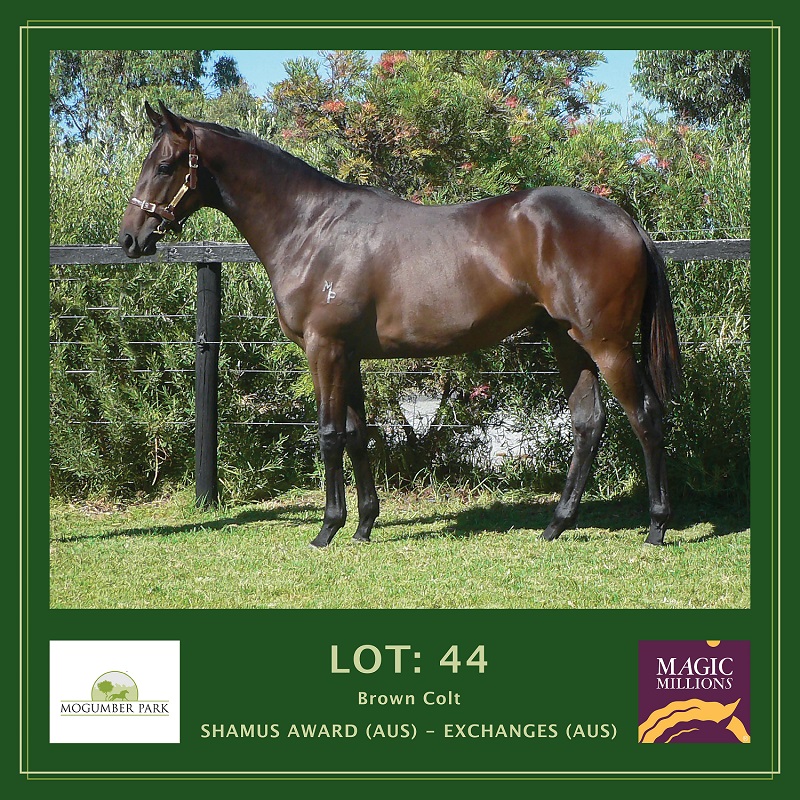