Back in May, Oakland Park owner Neville Duncan predicted the winners would start flowing for Sessions towards the end of the year.

They’re doing that and more in the spring and summer of their 3yo season with Massimo logging his sire’s fourth win in the last 18 days at Ascot on Saturday.  The Adam Durrant-trained gelding controlled the Myatts Field Vineyards Hcp (1200m) and was strong through the line for Willie Pike.

“He’s a proper horse and I thought he could win wherever he landed although I didn’t think it would be ideal in the lead,” Durrant conceded.  “He’s a natural and, when you’re on board, it feels like a Ferrari.

“We will keep banking the Westspeed bonuses and set him for those 3yo stakes races at the carnival.”

Massimo is an Oakland Park homebred and is raced in partnership with Adam’s sister Renee Durrant.  He’s a half-brother to the dam of G1 Golden Rose winner Exosphere (Lonhro).

Sessions was purchased from Godolphin after a career that garnered five wins to Group 2 level in The Shorts (1100m) at Randwick.  “He has the temperament and physique to match that ability,” Duncan said.  “The Lonhro connection also won me.  He’s really making a name for himself as a sire of sires.”

There are more 3yo winners by Sessions in the pipeline.  Lou Luciani won a Bunbury trial with Goodbyefeds last Friday and Port Kennedy trainer Anne King won a Lark Hill trial with Blazing Billy on Monday

Superstorm complemented the Sessions haul for Oakland Park in the Mrs Mac’s Hcp (1400m) at Ascot on Tuesday.  The Sebring 3yo is a homebred for Peters Investments but his dam Stormy Nova (Metal Storm) was catalogued for the 2017 Magic Millions National Sale and Duncan swooped with $45,000 to take her back to WA.

Stormy Nova has a yearling colt by Street Boss and she had a delayed date with Sessions last December.

Sessions stands for a $5,500 service fee at Oakland Park alongside King’s Troop who is available for $2,750. 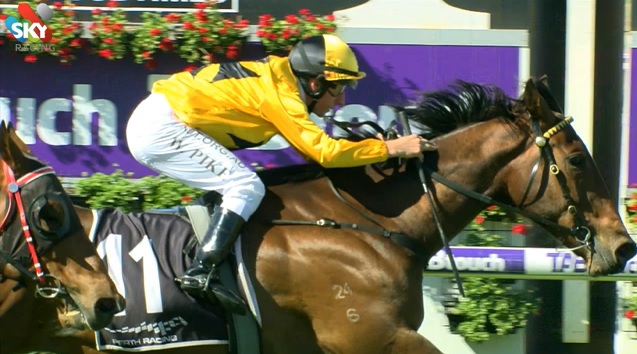