Electric Light knocked on the door for a stakes win more than once last season and she was finally rewarded with that all-important black-type in the LR Jungle Mist Classic (1200m) on Saturday.

The Vital Equine (Ire) mare unleashed a powerful finish to defeat Beautiful Mind (So You Think) and Dance Music (War Chant) in the first-leg of what promises to be a high-class series for the fillies and mares over the summer carnival at Ascot.

Electric Light raced straight through the classes winning 7 of her first 9 starts for owner-breeder Andy Phelan in 2018. She nosed out Lady Cosmology in a thrilling finish to the Marjorie Charleson Classic (1200m) earlier this year and followed up with seconds in the G3 Northam Stakes and LR Beaufine Quality.

“She won against the pattern and had to work three-wide,” trainer Adam Durrant said. “I’m really proud of her and very happy for Andy. He rang this morning and told me it had been seven years since our last stakes win.”

Phelan raced Perth Cup winners Ullyatt (1986) and Ros Reef (1995) and he also bred Knight Academy (Royal Academy) who Durrant rated as potentially his best-ever galloper prior to injuring a tendon.

Electric Light is the first foal out of Candle Smoke (Trade Fair) who won twice at the provincials during a brief six-start career. She has a 2yo filly by My Admiration and a yearling filly by Alfred Nobel.

Winning jockey Willie Pike conjured a trademark finish which resulted in a quick 34.61s sectional for the final 600m. “She was always going to have a good kick but I kept getting fanned wider and wider on the corner,” he said. “I just knew I had to get her into the clear.” 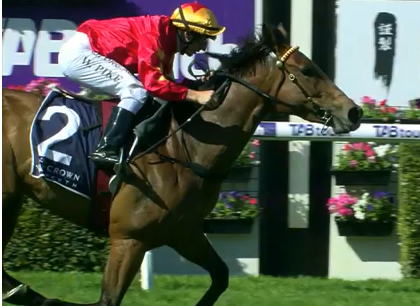