Scenic Lodge sire Universal Ruler grabbed a double at Ascot on Saturday but the biggest run of the afternoon came in defeat when The Velvet King finished third in the G2 Lee-Steere Stakes (1400m).

The Velvet King got first run in the straight but was overhauled in the final stages of the weight-for-age contest by Perth Cup winner Star Exhibit and his stablemate Gatting.  “It was a super run.  He was found wanting in the final furlong but will improve,” jockey Mitch Pateman claimed.  “He drops 6kg in the Railway and will be very hard to beat.  I wish I could ride him!”

The Darren McAuliffe-trained gelding firmed into $10 for the G1 Railway Stakes (1600m) on November 23.

McAuliffe prepared Universal Ruler’s first winner at Ascot when Abdicator took the field up to tearaway leader Wrinkly in the Hemponics Australia Hcp (1400m).  It improved his record to 7 wins in 23 starts highlighted by last year’s LR Rangeview Classic at Bunbury.

Abdicator (5g Universal Ruler – Royal Escapade by Royal Academy) will be set for more black-type in the LR Carbine Club Stakes (1400m) at Ascot on November 23.

Uni Time filled out the Universal Ruler double for trainer Sharon Miller in the Crown Sports Bar Hcp (1200m).  Jockey Alan Kennedy weaved through traffic in the straight to win in a quick 1:09.47s.

“I was a bit worried when we came into Barrier 1 after the scratchings,” Kennedy said.  “But he got me out of trouble with his turn of foot.”

Uni Time (4g Universal Ruler – Darntime by Danetime) has won 5 races and has never been out of a place in 10 starts.  He’s a half-brother to WA winners Regal Gleam (Alfred Nobel) and Time To Trade (Trade Fair) and has earned $178,830 including Westspeed bonuses of $16,000 for owner-breeder Ian Roberts.

Miller was setting him for the LR Hannans Hcp in Kalgoorlie but had to turn him out in August.  “He’s very smart but needed time,” she said.  “We’re doing the right thing letting him go through the grades and there’s a good race in him next year.”

In the meantime, Uni Time will join Abdicator in the Carbine Club Stakes at Ascot in a fortnight.

Universal Ruler stands for a $6,600 service fee at Scenic Lodge. 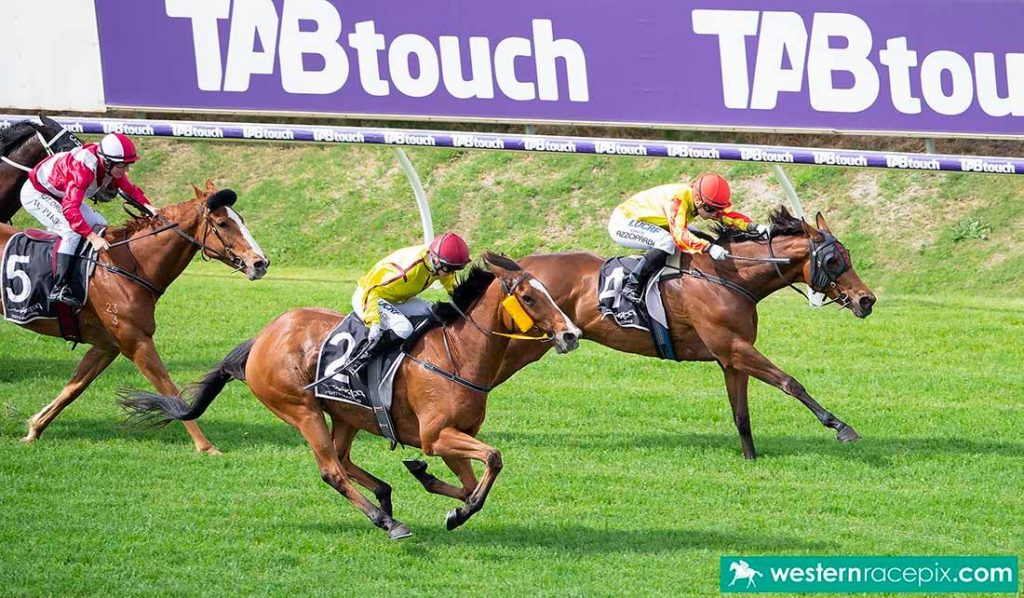