Jimmy Choux youngster American Princess is likely to be put aside for stakes races after dodging trouble to win the Wentwood Grange Premier (1200m) at Te Rapa on Saturday.

Jimmy Choux (NZ) is currently completing his first book at Roselee Stud in Serpentine after commencing his stud career in New Zealand.  He got the Te Rapa debutante from G2 Wakefield Challenge winner Steel Rose (Guillotine).

“We’ve liked her since she first entered the stable and expected a good run first-up,” Forsman said.  “She had shown up at home and her trial win was very good.  She’s a pretty sensible filly with a really nice turn of foot.  She wasn’t that quick out of the barriers but Danielle (Johnson) got on the back of one that carried her into the race.”

American Princess was poised to come around the heels of the leader Jamieson’s Tipple in the straight but bumped Tokorangi and was pushed back towards the fence.  That may have been a blessing in disguise because Jamieson’s Tipple began racing greenly and inconvenienced Tokorangi.

Johnson took advantage and gave the winner a reminder before stretching out along the rails for a super impressive win.  “It is tempting to maybe go back to the well one more time but she will most likely have some time off now,” Forsman said.  “She isn’t Karaka Million eligible so some of those late summer and autumn two-year-old features are the focus.

“She is pretty professional so a race like the (G2) Breeders’ Stakes at Matamata in February is an obvious target.” 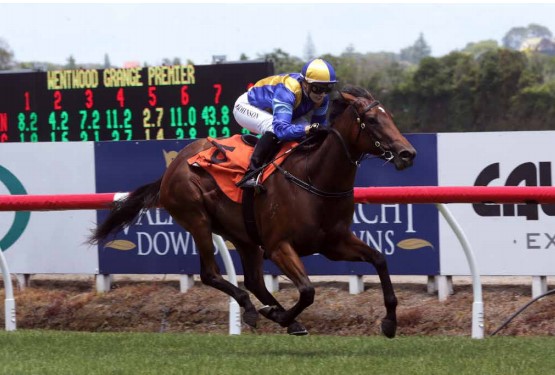