The Brazilian-born rider was competing at Kranji for the first time since winning the 2018 Chairman’s Trophy (1600m) on the Lee Freedman-trained galloper Circuit Land (Mizzen Mast).

Maia went on to win two titles in Macau before returning to Singapore this month with a long-term contract.  Booked for just the one mount on Friday evening, the Sao Paulo native made the most of that opportunity with a textbook ride.

Ironside was resuming after a six-month absence and benefited from a rails run while all his rivals scouted wide.  “Full credit to Ruan.  He rode the horse an absolute treat,” Logan said.  “Ironside was meant to be our Singapore Derby horse but he fractured a fetlock.

“He recovered, but it’s been a protracted time on the sidelines.  I didn’t trial him so he was a little fat for the comeback but he’s a very nice horse.”

Ironside is raced by Lars Pearson and is a half-brother to Dreamcatcher who won five races in Singapore.  Their dam of Camilla (Personal Escort) won a Wairoa Gold Cup and her sister Envoy won a G1 Wellington Cup.

Another close relation is Golden Heights (Rocky Mountain) who won the G1 Railway Stakes and G3 Prince of Wales Stakes at Ascot for trainer Harley Johnston in 1980.

“It was my first ride back here and I checked his records and saw he’s not a bad horse,” Maia said.  “He’s had a long break but from the good barrier we had a perfect run on the rails.  Once he found room in the straight, he just kept hitting the line very well.”

Ironside won at Avondale before transferring off-shore and he is one of five winners in Singapore by Jimmy Choux (NZ) who moved to Roselee Farm in Serpentine last year.  His top-class 3yo filly Two Illicit won the G2 Royal Stakes (2000m) at Ellerslie on New Year’s Day and she holds a Group 1 nom for the NZ Oaks (2400m) on March 14. 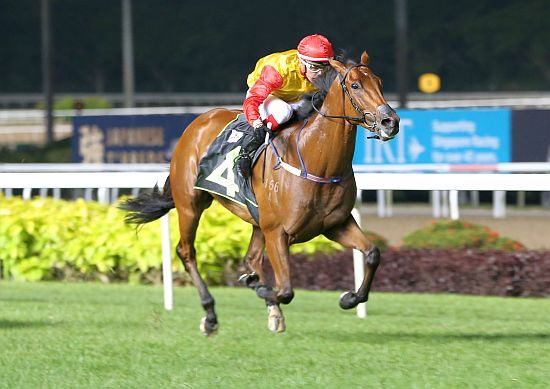