Awesome Rock’s first-crop yearling colt from Sigaro made everyone sit up and take notice at the Gold Coast Magic Millions Sale on Sunday.

Catalogued as Lot 985 by Attunga Stud as agent for Gold Front owners Alan and Sue Olive, he put on a show in the sale-ring that was captured by photographer Katrina Partridge.  Fortunately, his handler Caleb Degen is a first-class horseman and he calmed the youngster before Team Hawkes made a successful bid of $150,000.

It was a good start for Awesome Rock who stands for an $6,500 service fee at Gold Front Thoroughbreds in Breera.  The colt’s dam Sigaro (Lujain) has already foaled Perth stakes performers Prete A Partir and Black Cuban.

Awesome Rock (Fastnet Rock) won the G1 Mackinnon Stakes at Flemington and he has another 17 first-crop yearlings catalogued for the Perth Magic Millions on February 17 & 18.  His filly from Brisbane stakes winner Belle D’Amour (Lot 158) is bred to go early and the Olives rate her one of the picks of their draft in the Swan Valley.

Ascot trainer Neville Parnham outlaid a total of $470,000 for colts by Dissident & Zoustar and fillies by Dissident and Sebring.  The Dissident colt is a half-brother to Awesome Rock.

Simon Miller paid $210,000 for a Nicconi filly and Mt Hallowell Stud’s Craig Thompson also weighed in with $210,000 for a Snitzel filly from Sydney Group 2 winner Imana. 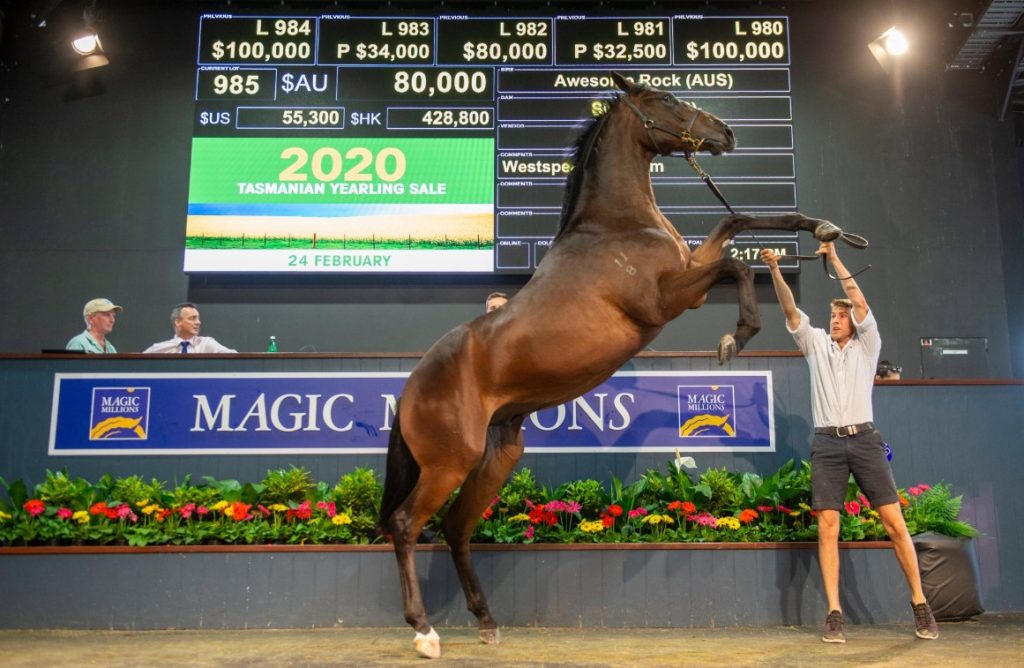