His service fee is yet to be confirmed although it’s expected to be the in the $5,000 range.  A son of ill-fated champion sire Hinchinbrook (Fastnet Rock), he will stand alongside Flemington Group 1 winner Awesome Rock (Fastnet Rock).

Leonardo da Hinchi arrived at Gold Front on December 23 and the news comes just a week before the first Awesome Rock yearlings parade at the Gold Coast Magic Millions.  Gold Front owners Alan and Sue Olive have catalogued two of his colts through Attunga Stud starting with (Lot 609), the half-brother to Perth star Lady Cosmology.

“We bought his dam Out Spoken Lady before Lady Cosmology came good,” Sue Olive recalled.  “And Brian (Nutt) told us her Awesome Rock colt is creating a lot of interest at the Attunga parades.

“Awesome Rock is a big, strong, robust stallion and he’s passing that on to his yearlings.  We have another 7 among the 17 lots by him at the Perth Magic Millions in February.”

The Olives bred Awesome Rock at their Breera property approximately 50km north of Perth and sold him for $575,000 at the 2013 Gold Coast Magic Millions.  They retained a share in a syndicate with Team Corstens and that decision paid off with $2 million in prizemoney and a guaranteed start at stud.

He won the 2016 Group 1 Mackinnon Stakes on Victoria Derby Day at Flemington and fortunately for Western Australia, they priced him under the odds for local breeders at $8,000.

That same approach applied when Leonardo da Hinchi was sidelined with fetlock issues after an explosive victory in the G2 Stutt Stakes (1600m) at Moonee Valley last season.  “Kim Renner and Glen Kettlewell popped in for a meeting on the way through from Geraldton to Perth and we worked out a deal to keep the horse at stud in WA.”

Renner also races WA Horse of the Year Black Heart Bart and he bought Leonardo da Hinchi for $100,000 from Gervase Park at the 2017 Perth Magic Millions.  Sent east to join ‘Bart’ in Victoria, he won on debut at Echuca in July 2018 and backed up for another late-season juvenile win at Sandown.

In his first two starts as a 3yo, he chased home eventual G1 Doncaster Mile winner Brutal for placings in the LR McKenzie Stakes and LR Exford Plate before accelerating to a convincing victory when stretching out to a mile in the G2 Stutt Stakes.

Trainer Mick Price brought him back for a Group 1 campaign into the 2019 Stradbroke Hcp but he didn’t fire in three starts during the winter carnival in Brisbane.  “He’s got a motor,” Sue Olive declared.  “That was obvious when he was held up for a run coming into the straight at Moonee Valley.  He was still pretty raw but went straight past them when Brad Rawiller angled into the clear.”

His sire Hinchinbrook, a three-quarter brother to Snitzel, was Champion Australian freshman in 2014-15 and his first three crops included Group 1 winners Press Statement, Beat The Clock, Seabrook and Spright.

Portrait is a half-sister to Group 2 winner Jet Spur (Flying Spur) and she has an Awesome Rock colt on the ground this season.  Second-dam Verocative (Bletchingly) won a G3 Thoroughbred Club Stakes at Caulfield. 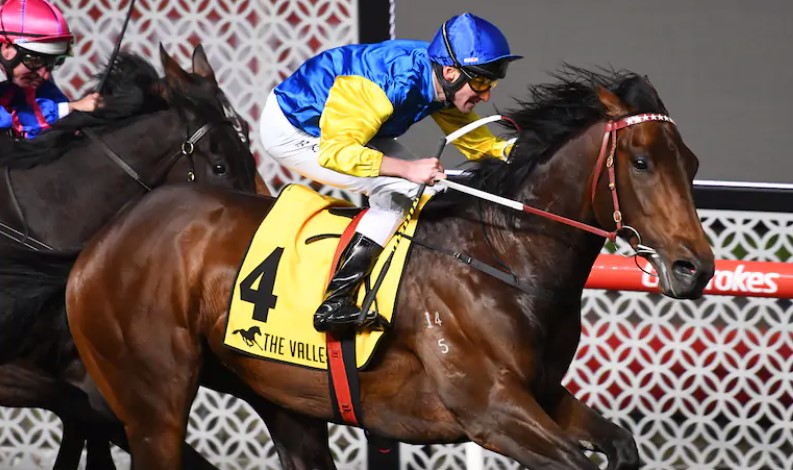