Bradbury’s Luck has his first crop from Yarradale Stud timed to make an impact going forward to the Perth Magic Millions Yearling Sale.

At Lark Hill on Monday, he signalled an early breakthrough with 2yo trial winners Gracienne and Keep Your Feet. Both youngsters won from the front and scored with plenty in hand.

Gracienne looked readymade racing along the inside rail and she coasted to the line under Jason Brown. Trained by Robert & Todd Harvey, who bought her for $40,000 at the 2019 Perth Magic Millions, she is from Eagle Farm winner Newborn (Halo Homewrecker).

Yarradale sourced Newborn from a Patinack Farm dispersal at the 2015 Magic Millions National Sale. She was bred in WA by Fiona Gerrard and hails from the family of Group 1 winners Rogan Josh and Machine Gun Tom.

Keep Your Feet wasn’t asked to extend by Chloe Azzopardi and he looks a bargain for trainer Simon Miller and connections off a $30,000 price-tag at the 2019 Perth Magic Millions.

His dam Shan Dian (Rory’s Jester) was a Lindsay Park-trained winner at Morphettville and Moonee Valley who also descends from another branch of Bellbridge Park’s perennially successful family of Rogan Josh and Machine Gun Tom.

Bradbury’s Luck (Redoute’s Choice) has three yearlings from his second-crop coming down from Gidgegannup to the Swan Valley in February. He moved west soon after Group 1 star Luckygray was named WA Horse of the Year.

First of the trio to parade is the colt from Petite Belle (Lot 86). The dam is an unraced daughter of Winterbottom Stakes winner Petite Amour and her immediate family includes Bradbury’s Luck Melbourne stakes winner In Cahoots.

“He’s a big strong colt with good bone and frame and will fill out nicely,” Yarradale manager Bernie Hamill said this week.

Yarradale Stud’s draft will be stabled in Barns D and E at the Swan Valley sales complex. 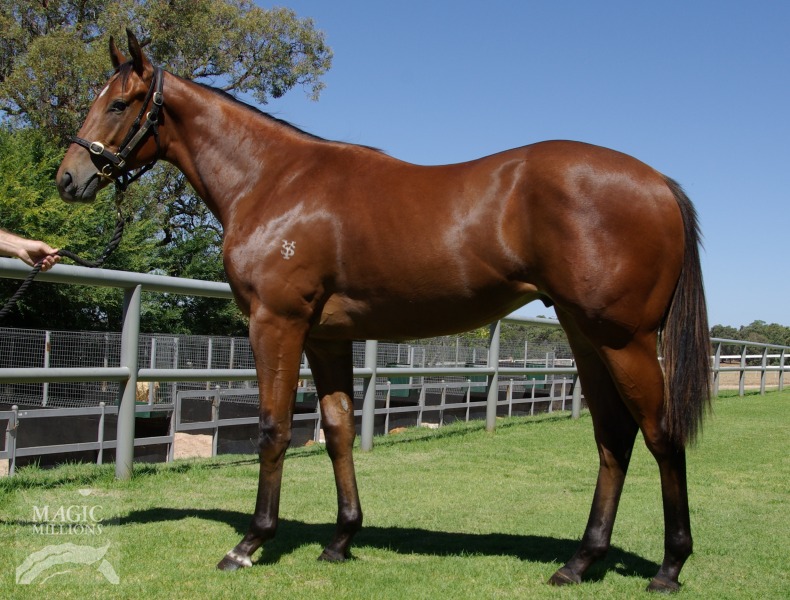