John Andrew has been a fixture at Perth yearling sales since 1974 and he’s back with another consignment of 15 quality lots for next month’s Magic Millions in the Swan Valley.

Selling under the Alwyn Park banner, Andrew has yearlings by resident sire Maschino and first-season stallions Awesome Rock and Vert de Grece (Ire) as well as the final yearlings by Blackfriars and Trade Fair (GB) who died at his Serpentine property in March 2018.

Andrew arrived in racing in a roundabout way.  His parents were hoteliers but John wanted to be on the land after graduating from Christ Church Grammar in Claremont.  He qualified as a wool-classer and worked at horse, sheep and cattle properties from Northam out to Wyalkatchem for farmers like Tom Brennan, Pat Walsh and Tom Wilding.

“Like everyone else in the area, I played polocrosse and rode horses like Four Corners who was later sold to the Roycroft family to represent Australia as a show-jumper at the Olympic Games.  Then I leased a colt from Paddy Jennings and was bitten by the bug.

“I answered an advertisement for a stud manager in Elders Weekly,” Andrew recalled.  “There were 60 applicants and I landed the job with Jeremy Hayes at Karnup Stud.

“I can still remember that first yearling sale with Jeremy like it was yesterday.  Back in the 1970s, they were auctioned in front of the Belmont Park grandstand.  I led in three yearlings and they all ended up winning races.”

The best of them was Good Morgan (Swiftly Morgan) who was a Listed winner of a Farnley Quality and WATC Plate for trainer George Way.  He held the Belmont 1200m track-record that stood for an amazing 33 years!

Daffodil (Prince Of Orange) also knocked up winning lots of races and her descendants included Scopaciri who won seven sprints in Perth and then sired winners his trainer Peter Giadresco.

Hayes and his business partner Tony Freebairn had hit pay-dirt in 1971 when they discovered a huge mineral-sands deposit at Eneabba.  Freebairn struck it rich a second time when he imported Jungle Boy (GB) to stand at Haddow Stud in the Chittering Valley.

Among his myriad of stakes winners was the Hayes-owned filly Lost World who won the 1981 Pinjarra Guineas before trainer Len Morton took her to Sydney for a career-high victory in the G3 Surround Stakes at Warwick Farm.

Andrew and his wife Sandra had gone out on their own by then after buying 80 acres at Serpentine and calling the property Alwyn Park after their daughters Alison and Bronwyn.

“Western Australia had some top-class stallions in those days – Jungle Boy, Zvornik, Beau Sovereign, Haulpak,” he said.  “And we are lucky enough to still have one of Beau Sovereign’s best sons Palace Reign.

“He came here as a foal at foot with his dam Brechin Castle who had won a WA Oaks.  We took him to the 1991 Yearling Sale but at that time the industry was struggling after the fall-out from WA Inc

“Palace Reign was bred by Mike Scaffidi, Bill Moffitt and Lou Ligovich and they put a $55,000 reserve on him.  The bidding stopped $5,000 short and they told me to bring him back home.  I thought they should have taken the money but, as things turned out, it was the right decision.

“I broke him in and he was eventually transferred to Lindsay Park from where he won the 1992 Caulfield Guineas.  David Hayes was bullish about his chances in that year’s Cox Plate but he went down in a three-horse fall with Naturalism and Sydeston.

“He came out of it with bone chips but recovered and won a Memsie Stakes and Feehan Stakes the following year.

“I had always vowed not to stand a stallion but Mike talked me around and Palace Reign ended up siring his fair share of winners without ever being a leading commercial stallion.  He’s 30 now and whinnies every morning to let me know he’s still around.”

Maschino (Encosta de Lago) has a future as a marketable sire after doing it the hard way at Alwyn Park.  “He was top-class but only raced in Perth which can be a disadvantage,” Andrew explained.  “He only had a handful of mares early on but his books are upwards of 70 now which is good going for WA.”

The Maschino brother to Snowchino (Lot 179) is one of highlights from Alwyn Park.  “He’s a big powerful colt with plenty of bone and a lovely nature,” Andrew said.  “He’s got everything going for him and everyone will like him.”

Alwyn Park’s first yearling through the ring is the Awesome Rock – Disco Miss colt (Lot 7) who is a half-brother to Maschino’s multiple city winner Maschino Miss.  “I hope he can put on a show like the Awesome Rock colt that sold for $150,000 on the Gold Coast earlier this month.  I rate Awesome Rock and we have a colt on the ground by him from our mare Amazingtale (Tale of the Cat) who has already thrown four winners.”

Andrew also sent Balmont Girl, a Group 3 winner of a WA Oaks and Asian Beau Stakes, to Awesome Rock and she has been tested positive for her owner Cooni Chua.

“And I might be one-eyed but I like the last of our yearlings by Trade Fair.  He was a really under-rated sire – they can be highly-strung – but they respond to one-on-one care.

“We bred and sold Captain Obvious for $24,000 at the Magic Millions and he won 15 races in Singapore and Malaysia.  He also won in Dubai beating a horse who had been placed in the G1 July Cup at Newmarket.”

Vert de Grece is by Verglas (Ire), a grandson of Kenmare, who was very successful in WA off a two-year stint at Alwyn Park in 2004 and 2005.  The Kenmare branch of the Grey Sovereign line has been especially popular in the west through Verglas, Metal Storm, Tribu and Kenvain.

Grey Sovereign had made an impact in WA during the 1980s and 1990s through classic sire Cheraw (Caro) at Limestone Park.

“Hopefully, Swan Valley can help us build a buying bench from interstate and Asia,” he said looking to the future.  “Especially Singapore and Malaysia.  RWWA and Own The Dream are doing a terrific job on the local front, too.

“The horse industry really is a passion.  Foaling down, preparing them for the yearling sales, and then you see them go and win races.  It’s very rewarding.”

Andrew’s personal rewards include Life-Membership of Thoroughbred Breeders’ WA.  He’s one of only three local breeders to be given that honour following Sir Ernest Lee-Steere (Limestone Park) and Sally Oakes (Fairfields Stud).

“I love it and if you can make money it’s a bonus.  That’s the way I’ve always looked at it.” 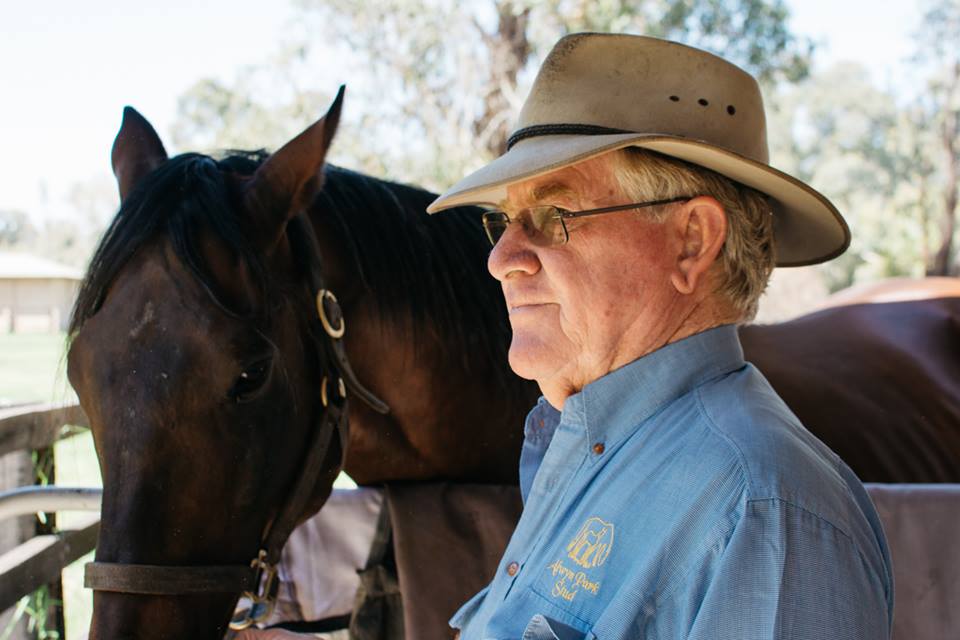