Mungrup Stud freshman I’m All The Talk sired his first winner when Watch Me Dance launched a last-to-first burst in the TABtouch Maiden (1016m) at Bunbury on Monday.

Watch Me Dance was a dozen lengths off the pace in the 2yo scamper but sprouted wings when angled to the centre of the track by jockey Ryan Hill.  “Wow!  What a performance,” trainer Steve Wolfe declared.  “She’s come from a seemingly hopeless position to win.”

Wolfe predicted his filly will be hard to beat in the $250,000 Magic Millions WA 2YO Classic RL at Pinjarra on February 8.  “I like the progeny of I’m All The Talk.  They work with you the whole way.  There’s not a negative about them.”

Commercial Bloodstock’s Noel Carter bought Watch Me Dance from Mungrup Stud for $34,000 at the 2019 Perth Magic Millions.  Her dam Coventry To Rio (Oratorio) was a stakes-placed winner at Ascot and she has another I’m All The Talk colt catalogued as Lot 329 at next month’s Magic Millions.

Apart from the brother to his first winner, I’m All The Talk has 13 yearlings for sale in the Swan Valley on February 17 and 18.  Another highlight is the colt from fleet-footed sprinter Scuffs (Lot 99) who won to Listed level in a Summer Scorcher at Ascot.

Watch Me Dance is raced by a ladies syndicate that includes Wolfe’s wife Maureen and Mungrup Stud’s Jan Williamson.  “She was Mum’s favourite yearling last year so she kept a share,” Mungrup’s Ann Croucher recalled on Tuesday.  “I’m All The Talk’s first two year olds are gaining momentum.  They’re early goers – just like their Dad.

“They’re tractable, sound and thrive in the stable environment.  He has also had Mr Have a Chat run fifth in the (LR) Blue Diamond Preview at Caulfield on Saturday.  Johnny Price bought him out of our draft last year and thought he was a real 2yo type.”

I’m All The Talk is a son of G1 Golden Slipper winner Stratum (Redoute’s Choice) and another Golden Slipper looked likely when he hit the ground running for trainer Gary Portelli.

A winner second time out at Warwick Farm, he returned from a summer spell with an explosive three-length victory in the G3 Skyline Stakes (1200m) at Warwick Farm.  The Golden Slipper dream was alive until the field left the chute on to the course proper at Rosehill.  He was tightened, checked and lost a plate in the scrimmage before finishing midfield behind Overreach.

Back in training as a three year-old, I’m All The Talk beat top colt Zoustar in a Rosehill trial but his career was put on hold following a life-threating throat infection.  “He was a very sick horse,” Portelli remembered.  “It was heart-breaking because I knew he would have won a real good Group race as a three year-old.

“He was the fastest sprinter out of the gates I’ve ever trained.  He loved to lead and just roll through the gears.  He’s a terrific stallion prospect for Western Australia.”

Portelli bought an I’m All The Talk filly at the 2019 Perth Magic Millions and she has been named She Can Talk.  “We visited Mungrup before the Sale and I’m sure he remembered Gary,” Portelli’s wife Kellie said.  “He walked straight up and put his head in Gary’s hands.  It was amazing.” 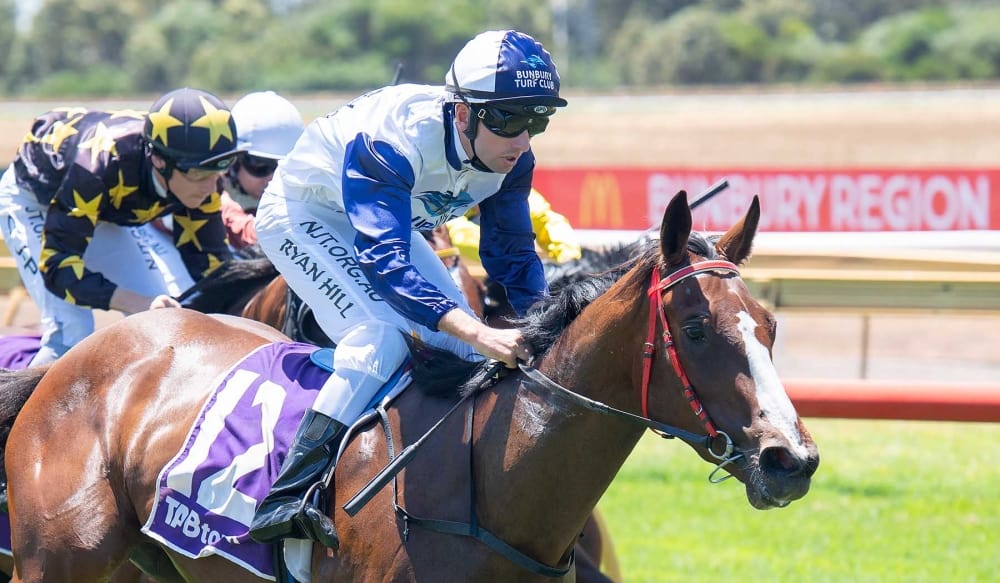